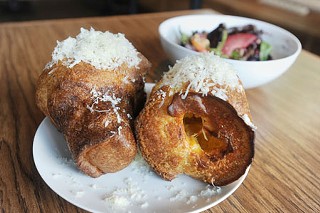 
Chef couple Ned and Jodi Elliott arrived in Austin last year with impressive culinary credentials to create their first restaurant. They are both graduates of the Culinary Institute of America and have worked in some of the most high-profile restaurant kitchens in New York, London, and Portland, Ore., learning from chefs such as Alain Ducasse, Thomas Keller, David Bouley, Claudia Fleming, Danny Meyer, Doug Psaltis, and Michael Symon. Résumés such as theirs might lead potential diners to expect a sophisticated dining experience with elaborate tasting menus served on white tablecloths at expensive prices. On the contrary, the Elliotts' new eatery, Foreign & Domestic, is very approachable. Decor in the small cinder-block building is streamlined and informal, the service is friendly and welcoming, and the menus (seven appetizers, six entrées, six beers, and eight wines) are small and spare with minimal description. At Foreign & Domestic, the Elliotts let their cooking do all the talking. This is some of the finest, most reasonably priced restaurant cooking I've encountered in quite some time.

Some friends joined me recently for Foreign & Domestic's version of happy hour, the Blue Hour. The early menu offers a couple of refreshing cocktails and four tasty treats in the $5-6 range. The Panty Dropper ($6) is a refreshing mixture of Coppola Sofia sparkling wine, pineapple juice, and cardamom, while the Cyclist is a fizzy blend of Session Lager, preserved lemon, and Jamaican ginger beer. One of our favorite snacks was the bowl of fried okra and shishito peppers ($5). Barely dredged in flour and lightly fried, these hot crunchies can be addictive. The other knockout was a plate of tomatoes and Man­chego ($6), fresh chunks of summer's bounty dressed with celery pesto, an incredibly mild coconut vinegar from the Philippines, Man­chego cheese shavings, and a chiffonade of fresh herbs. It's all light and seasonal – a relaxing twilight stroll through the culinary garden designed to whet the appetite. Keep eating.

In two dinner visits, friends and I have pretty much eaten our way through the entire menu and found no weak spots. Each plate is well-conceived and well-executed, with some special touch that brings all the elements together in delicious harmony. From the Nibbles & Chomps section, do not miss the popovers ($5), two boxing-glove-sized beauties that are crackling golden brown outside with a black pepper-Gruyere soufflé interior. (Use pieces of these to sop up every last drop of Ned Elliott's remarkable sauces.) The beef tongue ($8) has a crispy exterior that gives way to the very essence of beefy flavor, complemented with a horseradish yogurt sauce, microgreens, and shaved watermelon radishes. The chilled gar­lic and almond soup ($6) is a cooling riff on classic Spanish white gazpacho with the underlying sweetness of honeydew offset by tangy verjus and toasted Marcona almond chunks.

Of the six entrée plates we sampled, three still stand out in my mind several days later because of intriguing component parts. A crispy-skinned filet of Nicholson's sock­eye ($20) arrives on a bed of oven-roasted green tomato and toothsome summer succotash, topped with a ridiculously marvelous bacon jam. The crunchy crust on the tofu ($13) gave way to a delicate, fluffy interior, inspiring the chef friend who ordered it to inquire about the possible local source of the product (MT Supermarket, according to Ned Elliott). The revelation in this bowl, however, was a bed of humble cream peas with a silken carrot butter. Chef Elliott's complex and elegant carrot butter is a strong contender for the best carrot dish I've ever eaten anywhere. I don't eat soy, but on our second visit, we requested a bowl of peas and carrot butter for the table and the kitchen was kind enough to hook us up. Should you order the Ripper ($14), be advised that the word "sausage" here does not refer to a traditional Texas German/Czech dry smoked meat product but rather a casing filled with shredded and spiced hog's head and tail meat. The kitchen staff wraps their take on sausage in bacon and cooks it until the bacon is crisp. The dish really begins to sing when the shredded pork meets the assertive tarragon mustard and sweet, tangy bread-and-butter relish slathered on the crunchy toast points underneath.

Jodi Elliott's desserts are equally appealing. The chocolate parfait ($7) presents contrasting layers of pudding, mousse, tapioca, and sherbet under a crown of crunchy rice cereal. Plunge the spoon all the way to the bottom for the full contrast effect with every bite. The base of the coconut sundae ($7) is a buttery lime tart topped with voluptuous toasted coconut ice cream and fresh blackberry sauce. The luscious filling in the hot, plump, blue­ber­ry fried pie ($7) marries beautifully with velvety pistachio ice cream, though I would have preferred a pastry crust rather than yeast dough. The bacon root beer float ($7) was the only dessert I didn't really love, but I was long over the persistent chocolate-bacon ice-cream trend before I encountered Mrs. Elliott's work, so I'll give her a pass. It's a trendy conversation piece and nothing more.

Ned and Jodi Elliott possess serious technical skills and fascinating palates. I'm thrilled to see their addition to the Austin restaurant scene and curious to see their menus evolve through the local seasons. In keeping with their minimalist aesthetic, I would simply say: Go eat there. 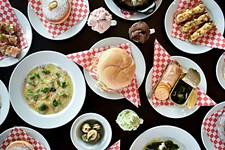