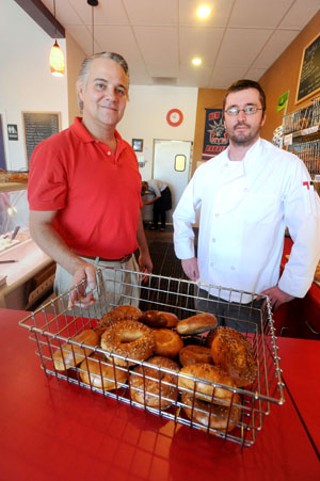 
During my childhood spent growing up on the East Coast, an onion bagel with chive cream cheese was my favorite comfort food. But having lived in Austin for nearly 20 years, I gave up hope long ago of ever finding a good bagel in this town. So believe me when I tell you that Wholy Bagel, which opened in far South Austin earlier this year, has revived my craving for bagels.

Scott Campanozzi, the brash New Jersey native who owns the store, knows a thing or two about bagels. First, he knows that bagels aren't supposed to be sweet (unless they happen to be flavored with fruit), like they sometimes are at chain bagel stores. Second, he knows that a good bagel must be kettled. This is the initial boiling process that gives bagels their iconic chew. Wholy bagels have plenty of chew, plenty of air pockets inside, but are still crisp on the outside. Third, he knows that coatings like onions, garlic, or poppy seeds should be ample. Campanozzi's coatings cover both sides of the bagel – not just on one side or tucked into the dough.

He learned the business through years of working as a commodities distributor to bakeries in the Northeast. If you have the time and a willing ear, he'll tell you all about it when you visit the store. And if you're like me, you'll listen appreciatively, grateful that finally there's a decent bagel place in Austin.

Campanozzi also makes his own cream cheese blends, which means they're fresh, though I thought the scallions in the scallion cream cheese were cut too large. And he offers a variety of meats, veggies, and condiments to build bagel sandwiches at lunch. Order a dozen bagels, and Campanozzi will give you his Texas dozen, which unlike a baker's dozen, is 14 bagels, because, you know ... everything's bigger in Texas.