4 cinnamon sticks, broken in half

Sterilize four 1-pint jars in boiling water and set them aside on a clean kitchen towel. Combine the vinegars, water, and sugar in a large nonreactive pot (mine is a copper jam pot) and cook over medium heat, stirring often, until the sugar dissolves. Add the cinnamon and cloves and bring the mixture to a boil. Cover the pot and boil for five minutes, then uncover it and boil five minutes more.

While the pickling liquid is boiling, quickly peel the peaches, leaving them whole with the pits in. (The easiest way to do this is to cut an X in the bottom of each peach and drop them in boiling water for a few seconds. Remove them from the water, and the skins should come right off.) Add the peaches to the pot of pickling liquid and bring the mixture back to a boil. Then turn the heat down to a simmer and simmer the peaches for 10 minutes. Using tongs, carefully pack the peaches into the jars about three-quarters full, then use a ladle to cover them with the hot liquid, leaving at least a quarter inch of headspace in each jar. Make sure each jar has a cinnamon stick in it. Wipe the rims of the jars with a clean, damp cloth. Immerse the jar lids and rings in the boiling water for a few seconds and then seal the jars. Process the jars in a boiling water bath for 10 minutes. Remove and cool. Yield: Four pints. – Virginia B. Wood

(adapted from Cakewalk: A Memoir by Kate Moses)


4 cups blackberries, washed and gently packed into a measuring cup

Seeds of 2 or 3 lemons, wrapped in muslin or cheesecloth tied with kitchen twine

Combine the berries and sugar in a heavy, nonreactive pot and mash the berries lightly with a potato masher. Add the bag of lemon seeds and allow the berries to macerate while you prepare the jars. Sterilize four or five half-pint jars in boiling water and set them aside on a clean kitchen towel. Place the jar lids and rings in a small saucepan, bring to a boil, and then set aside off the stove.

Bring the fruit mixture to a boil over medium heat, stirring occasionally. Skim off the foam that rises to the surface. (Moses says this foam was considered a real treat in her family.) Continue to cook the jam at a gentle boil, stirring often, until the mixture just begins to thicken, usually 15-20 minutes. You will notice that the foaming has subsided and the thickened jam has darkened slightly and burbles rather than boils. If using a candy thermometer (we did), the jam is ready at 221 degrees Fahrenheit.

Remove the jam from the heat, and use tongs to remove the bag of lemon seeds. (Moses says you can wash these and use them again, but our bag was a goopy mess, so we tossed it.) Ladle the jam into the clean jars, leaving at least a quarter inch of head space in each jar. Wipe the jar rims with a clean damp towel, seal the jars with lids and rings, and process in a boiling water bath for 10 minutes. Using jar-lifting tongs, remove the jars from the water bath and allow to cool. Yield: Our effort that day yielded four half-pint jars of very well-set jam, possibly because of the high fiber content of the berries themselves. – V.B.W. Peel the onions, and slice them very thin. (If you have a mandoline, this is the time to use it! It really makes this recipe much easier.) In a separate pile, slice the cucumbers rather thin also, but a little thicker than the onions, or they will fall apart. Position colanders in each of two large bowls, and put alternating layers of onions and cucumbers in the colanders, salting each layer as you progress. Use up all the salt, even though it seems like a lot. Let the salted vegetables sit for three hours. During this time, the water and excess salt will drain into the bowls.

Sterilize eight pint jars or 16 half-pint jars in a boiling water bath. (Leave the hot water on at a simmer.) Remove and cool on a clean kitchen towel. In a separate, very large stockpot, bring the water, vinegar, sugar, and spices to a boil, and boil for three minutes. Dump the colanders full of cucumber/onion mixture into the boiling vinegar solution, and discard the accumulated salty cucumber juice from out the bowls.

Stir the cucumber mixture once in a while, and when it starts to become hot, begin to fill the jars. I use a combination of tongs and a ladle, first putting cucumbers and onions into the jars with the tongs, and when they seem pretty full, adding the liquid with the ladle. Press down on the pickles with a spoon to force air bubbles out, leaving half an inch of headspace. Wipe the rims perfectly clean with a hot damp rag, and seal. Leave the lids screwed on just a tiny bit loose, to prevent exploding jars. (That way the heated air within the jars can bubble out in the water bath.)

Use tongs or a jar lifter to submerge the jars gently in the hot water bath, being careful to keep them upright. Bring the water up to a full boil, and process jars for 10 minutes. Remove from the hot water immediately, and allow the jars to cool. Tighten or remove rings when fully sealed. – Kate Thornberry 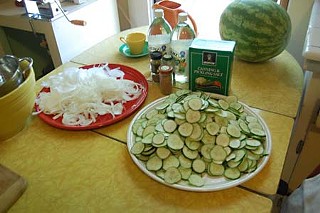 ½ cup green bell pepper, finely chopped (I used poblanos since I had them)

Bake whole eggplants at 425 F, turning as needed until they are soft and skin is charred, about 30-45 minutes, depending on size. Cool. Meanwhile, sauté onions in four tablespoons of the oil until they're translucent; add green pepper and garlic and cook for five more minutes or until the vegetables are soft. Transfer to a bowl.

Scoop pulp out of the eggplant and chop it finely, almost to a puree. Heat remaining oil on medium heat and add eggplant, sautéed vegetables, tomatoes, salt, sugar, and pepper to taste. Bring to a boil, stirring constantly so it doesn't stick to bottom of pan. Reduce heat, cover, and simmer for about an hour, stirring occasionally. Uncover and cook for about 30 more minutes until the liquid is evaporated and mixture has thickened. Stir in lemon juice and parsley; adjust seasoning. Transfer to a bowl and chill until ready to serve. To preserve, pack mixture in clean glass jars, top with a little good quality olive oil, seal, and freeze. – Claudia Alarcón