Preserving the bounty of summer The first home-canned foods I remember were spicy pickled peaches and vivid magenta pickled beets put up in the kitchen of my great-aunts Mattie Chester and Bessie Walden. Like other country women of their generation, my grandfather Walden's beloved older sisters cooked and canned out of a big kitchen garden. What they didn't grow, they bartered for with friends or bought from roadside stands. In my mind's eye, I can see gleaming jars of tomatoes, green beans, black-eyed peas, cucumbers, beets, and peaches lined up on the shelves in Mattie's storm cellar, waiting to complement meals all year long. The pickled peaches were paired with ham (Pop's favorite) or served as side dishes at Thanksgiving and Christmas. I haven't eaten those peaches since I was a teenager and hadn't even thought about them for years until the review copy of a new cookbook brought memories flooding back.

Cider Beans, Wild Greens, and Dandelion Jelly: Recipes From Southern Appalachia by Joan E. Aller (Andrews McMeel, $27.99, 212 pp.) offers recipes from a large geographical area that includes parts of Mississippi, Ten­nes­see, Alabama, Georgia, and the Carolinas. From what I know about both sides of my mother's family, our ancestors came here from all over that general area, so it made sense that some of the recipes in the book would strike a chord with me. As soon as I saw Aller's recipe for spiced peaches and the picture that went with it, the visual memory of the shelves of canned goods in Mattie's storm cellar flashed into my mind. I knew immediately what my peach-season canning project would be.

Unlike my great-aunts or frequent Chronicle contributors Kate Thornberry and Claudia Alar­cón (see "Why Can?," and "Preserving the Summer,"), my canning inspiration doesn't come from the need to preserve the bounty of a well-tended garden. But in addition to Aller's book, I was also inspired by Kate Moses' poignant Cakewalk: A Memoir, which I reviewed for our summer reading feature (see "Complete Summer Reading," May 28). In a chapter about spending summers with her grandparents at their "camp" in Sonoma County, Calif., Moses recounts the story of making blackberry jam with her grandmother. I envied her for having had a shared cooking experience I'd never had, and I was intrigued by the recipe that included her grandmother's secret for thickening fruit without using added pectin. So that gave me two recipes to try as soon as the summer fruit season arrived. And after my disappointing batch of plum syrup last summer, I was determined to give plum jelly another shot. Luckily, this summer has produced one of the best fruit harvests in a decade, and our farmers' markets were chock-full of blackberries, plums, and peaches during the month of June. I bought berries from Willie McKemie; peaches, plums, and apricots from Cliff Caskey; and more plums and perfect little cling peaches from the Lightsey sisters. I found some lovely jars from Italy and Germany at Sur La Table, and I was ready to get started.

During the first canning session, my friend Suzann Dvorken and I put up a dozen jars of plum jelly and three half-liters of pickled peaches. This summer, we used a basic jelly recipe that called for liquid pectin. Unfor­tun­ately, one of the packets of pectin never completely dissolved, and we had to strain the hot liquid into the prepared jars to remove the unsightly globules. Once the jars were processed in the canner, the result was somewhat thicker than last year's syrup but still not quite jelly. I called the canning expert in the cookware department at Callahan's General Store, and she found a remedy in the venerable Ball Blue Book. According to the instructions she read me, if the syrup had been sealed in jars, I could recook eight cups of it and add powdered pectin dissolved in water and a little more sugar to the reheated liquid in order to achieve jelly.

A couple of weeks later, Kate Thornberry joined me in the kitchen to recook and reprocess the plum goop, make blackberry jam, and put up the little cling peaches I'd bought from the Lightseys. The peaches look lovely in their little German jars, and I'm determined to save them for holiday meals. Using Moses' family secret (lemon seeds wrapped in cheesecloth added to the crushed fruit), our blackberry jam set up plenty firm. (You'll find both of those recipes in "Summer Canning Recipes," along with recipes from Kate and Claudia.) To repair the jelly, we prepared eight new jars and lids and reheated eight cups of the plum goop in my copper jam kettle. While the liquid was heating, we combined a teaspoon and a half of dry pectin and one tablespoon of water for every cup of hot liquid and brought that to a boil in a small saucepan. We added that mixture and half a cup of sugar into the hot plum liquid, stirred well, and brought the mixture to a rolling boil for a couple of minutes, then ladled it into the prepared jars and processed it for 10 minutes in a hot water bath. We came out with eight jars of soft jelly. I have more plums in the freezer, so I may keep making plum jelly until I get it just right.

While I was researching ways to correct my jelly problem, I came across some recipes for fruits preserved in syrup and liquor and another project sprang to mind. What about Hill Country fruits preserved with Texas spirits? I'm thinking peach slices with some of that Balcones Baby Blue from Waco, blackberries with Paula's Texas Lemon, apricots with Treaty Oak Platinum Rum, and plums in Tito's vodka. Each of those would make a great filling for shortcake or sauce for pound cake or Christmas gifts or .... 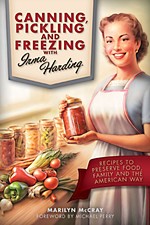 Culinary Checklist
Be sure to check our list for great tasty culinary gift ideas!