Tweet
print
write a letter
We were heading out on North Lamar, cruising for báhn mì (Vietnamese sandwiches), when I noticed a bus with Honduran flags on the side of the road, indicating curbside Honduran cuisine. That got me thinking; are there any more in town, or is this the only Honduran spot? A bit of concentrated searching revealed a growing number of Honduran spots in Austin, all serving fairly similar menus.

A menu lexicon before you go: a baleada is a flour tortilla taco with various fillings; an enchilada is the Honduran version of the flat, crispy tostada; a Honduran taco is a Mexican flauta; tamales are wrapped in banana leaves. Generally speaking, tortillas are not served with bananas or plantains; one starch at a time is enough. Beans tend to be black or small and red. Tajadas are fried slices of green banana or plantain and usually line the bottom of an entrée plate. Chismol is a mild pico de gallo, meant to accompany rich foods, and curtido is a beet-tinted cabbage slaw with vinegar. 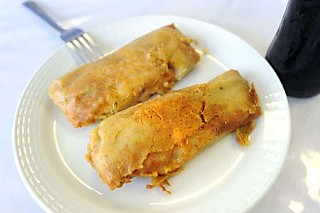 At the only nontrailer Honduran option in town we tried, we developed an instant respect for the tamales that started our meal. Tamales Hondurenos ($2.50) are large; stuffed with rich, tender pork (and a little potato); and encased in the lightest, most flavorful masa imaginable. Without question, this was the best tamale of my life. The equally large tamalito de elote con mantequilla ($2.50) is like a perfect marriage of masa and fresh sweet corn, topped with a saucy squiggle of butter and crema fresca. Superb. The weird thing is that it's three doors down from Costa del Sol, a Salvadoran joint that also makes amazing tamales, making this little strip center ground zero of any tamale-lover's tour.

The baleadas especiales ($2.50) impressed, filled with fried beef, refried black beans, avocado, and grated cheese which resembles Parmesan. Its version of tajadas con pollo frito ($6.50) was the only letdown. The leg quarter sits on a bed of fried plantain and lettuce. Both were improved by the addition of curtido. We also succumbed to the sopa Garifona ($9.99), a huge bowl of coconut-milk seafood soup, filled with plantain chunks, carrot, onion, chopped octopus, shrimp, mussels, fish, surimi, and a whole crab split down the middle, all in a rich seafood broth. The soup comes with a side of buttery rice. This little cafe blew me away. 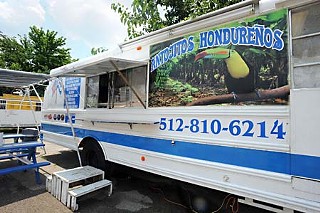 Differing in name from the previous cafe by only the tilde over the "n," this North Lamar food trailer is actually a school bus. Affiliated with two more buses in Houston, Antojitos has a picture menu that makes ordering easy for the non-Spanish speaker. You order at the window and then wait on the patio where there are a few tables. They shout out when your order is ready.

We started with a platano frito ($3.50), which is almost a meal in itself. The plate contains a whole pan-fried sweet plantain, rich and savory black beans, a puddle of crema fresca, and a big pile of grated cotija cheese, making the perfect taste combination. We each had an enchilada ($2): a big, crispy chalupa topped with minced savory pork, cubes of fried yucca and tomato, shredded cabbage and onion, cilantro, and grated cheese. We also split a carne molida con tajadas ($7.50). This starts with a bed of sliced, fried sweet plantain topped with a mound of very delectable minced beef and then accompanied by shredded cabbage, celery, carrot, cubes of fried yucca, and mild roasted peppers, all covered with a mild tomato sauce. We loved it. Word on the street is that the pork chops and fried chicken are well worth a return trip as well.


This little trailer, owned by sisters Jessica and Mimi, offers a complete Honduran menu, but the star is the excellent pollo frito ($8.50). Cooked to order, it has a seasoned crust, moist and juicy interior, and comes sauced with the typical dressing, served on a bed of sliced plantains, with a shredded crisp chismol salad – fantastic chicken.


We discovered this Honduran gem across the street from Sabor a Honduras, sucked in by the smell of grilling marinated pork skewers served with fresh tortillas and a mild green salsa. Succulent, smoky, tender, and inexpensive ($6 if memory serves), we could eat these every day.

Last but not least, we just heard about this new Honduran spot, with a cafe at 4700 Loyola and a trailer at the corner of East Oltorf and Greenfield. More Hondur­an food in Austin can only be a good thing.