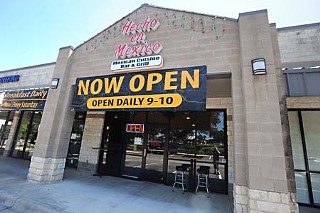 
I had read that these folks are striving to serve regional Mexican dishes not found on any other menu in town, so I was very eager to try it out. The menu boasts appealing items with a clear Central Mexico influence, which was confirmed when I discovered the owners are from San Miguel de Allende, Guanajuato. The tiny but welcoming space is well-appointed, with a long bar well-stocked with a variety of tequilas. The specialty cocktail selection includes signature margaritas (including one made with tepache, a fermented pineapple drink that's popular in Jalisco) and the strangest michelada I have ever had, what they call "San Miguel-style" ($4.50) consisting of a can of Tecate topped with cocktail shrimp tossed in a fiery tomato sauce with hints of habanero, with lime wedges on the side. The coolest aperitif I've seen in a while, it's likely to be copied at my house during the World Cup. We accompanied these with an antojito, flautas Maya ($8.50), which were more like tacos dorados: pan-fried and filled with tasty, moist chicken, topped with a xoconostle (the sour fruit of the prickly pear) sauce. As far as I know, xoconostles are not used in Mayan cuisine, but the flautas were succulent and devoured greedily.

We decided on three entrées: chicken in mole blanco ($14.50), camarones adobados ($14.50), and chiles en nogada ($13.50). The problems began when the obviously novice server took more than 20 minutes to bring me the wine sample I requested, and then another 30 minutes to deliver the aforementioned entrées. When they finally arrived, reviews were mixed. The mole blanco, a traditional sauce made with various nuts, mescal, and chiles gueros, was very authentic, but the thin chicken cutlet was dry and rubbery. The same was true of the shrimp, which were wrapped in bacon, skewered, and lathered in a delicious pineapple-tinged adobo sauce, but were obviously not grilled to order. The chile en nogada's sauce is a peanut- rather than walnut-based version and was a bit too sweet, but the stuffing was right on. The sauces here were all extraordinary, but it seemed the meats had been cooked in advance and reheated before serving. This, together with the chaotic (albeit friendly) service, was a letdown. I really want to like Hecho en Mexico, and I see huge potential. I hope management pays more attention to details, because correcting these flaws could turn a decent restaurant into a remarkable one. I will return to check.