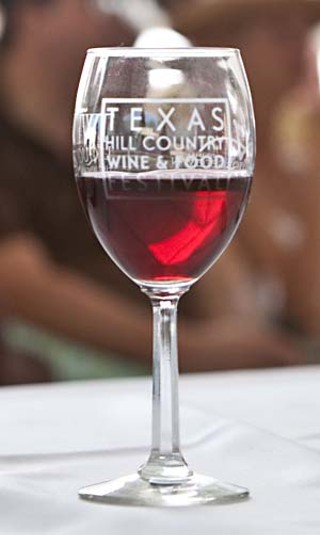 The Texas Hill Country Wine & Food Festival turns 25 years old this year. Fall Creek Vineyards co-owner Susan Auler and a group of friends founded the festival to celebrate and promote the emergence of the modern Texas wine industry with help from a handful of chefs who championed the regional cuisine of the American Southwest. Each year, organizers present Texas wines alongside those made by the best vintners from California, Europe, South America, or Australia and invite established or up-and-coming chefs from around the state and the country to provide the food pairings. There are seminars, tastings, cooking classes, parties, and winery tours, plus plenty of time for some business networking and relaxation, Austin-style.

In its 25-year lifespan, the festival has attracted a who’s who of Texas sponsors – including Whole Foods Market, H-E-B’s Central Market – and a five-year affiliation with the national food magazine Saveur. Both the Texas wine industry and our culinary landscape have evolved dramatically during the life of the festival, making it an interesting prism through which to view changes and accomplishments – some directly related to the event, some only tangential, others the result of national trends with impacts felt in Texas. In honor of the festival’s 25th anniversary, we spotlight 25 advancements in the wine and food culture of Austin and the Lone Star State, with many happy returns of the day.

On the business side, we would commend the economic growth and the creation of jobs in a fast-growing segment of Texas agriculture. But the most impressive changes have been in the diversity of grape varietals grown and wines produced based on a better understanding of Texas’ terroir.

2. Growth, Sophistication, and Diversifica­tion in the Texas Restaurant Industry

Austin’s public-television station had an established history with wine-tasting fundraisers even before the festival started and has been the nonprofit beneficiary of a portion of the proceeds of the festival’s Rare & Fine Wine Auction since 1990, receiving about $800,000 in the past 20 years. The Wine & Food Foundation of Texas continues to support KLRU despite changes in the economy.

5. Development of Other Wine and Food Events Around the State

When it started, the Texas Hill Country Wine & Food Fest was unique and solitary, but many other cities and wine destinations have gotten into act since then. There’s GrapeFest in Grapevine, the big wine competition associated with the Houston Livestock Show and Rodeo, Blanco’s Lavender Festival, the Hogeye Festival in Elgin, and the San Antonio New World Wine & Food Festival, plus smaller fests in towns like Sugar Land, Fredericksburg, Marble Falls, San Angelo, and even tiny Buffalo Gap.

Rancher Combs recognized the economic value of the wine industry and championed legislation that made it possible for wineries in dry counties around the state to sell wine from their own properties.

7. Growth of Agritourism in Texas

Texas wineries and trails around the wine-growing regions have become serious travel destinations – we’re told the Texas Hill Country is the second most popular wine travel destination in America after California’s Napa Valley. Diversification into crops such as lavender in the Hill Country and olives in South Central Texas serve as important tourism enhancements.

PBS’ Great Chefs of the Southwest put the spotlight on many of the same chefs who helped get the festival off the ground. Now Texas chefs show up on PBS, the Food Net­work, the Travel Channel, and even major network programs like Good Morning America and Today.

Saveur magazine partnered with the festival for a few years, raising the event’s national profile as well as those of the Texas wine and food industries. In an effort to make the event more profitable overall, the magazine’s eventual focus on national celebrity chefs and restaurateurs ultimately pulled it too far away from its Texas roots, but Saveur’s championship of authentic regional and artisanal foods offered welcome encouragement and exposure to Texas producers.

First it was the Texas cheese renaissance led by Dallasite Paula Lambert and the late Sara Bolton of Dripping Springs; then myriad salsas inspired by The Austin Chronicle Hot Sauce Festival; then artisan chocolates from Austin’s Cocoa Puro, Wiseman House in Hico, Chocolat in Fredericksburg, and Dude, Sweet Chocolate in Dallas; and most recently, the resurgence of artisan charcuterie and bacon at restaurants and farmers’ markets statewide.

Twenty-five years ago, there were some cooking programs at Texas community colleges and trade schools, but cooking jobs were just emerging from the category of trades to the realm of professional careers. Fast-forward to today, and the affordable community college and trade programs have been joined by courses presented at the Art Institutes (Houston, Dallas, Austin) and professional degree programs offered by campuses of Le Cordon Bleu (Austin) and the Culinary Institute of America (San Antonio).

Iconic homegrown Texas foods such as Pace Picante Sauce and Blue Bell Ice Cream hit the national mainstream. The Pace brand was instrumental in seeing to it that salsa outsells ketchup as America’s condiment of choice. BlueBell.com ships up to 1,000 half-gallons of ice cream a week around the country during peak seasons, demonstrating its power as a premium ice cream brand.

Development of both vineyards and wineries has been an economic boon for the state of Texas. So is the rebirth of small family dairies and farms – intensive vegetable farming on small acreage, artisan cheese production from small herds of cows or dairy goats, and the production of pastured chickens, turkeys, pigs, cattle, sheep, goats, deer, and bison are making it possible for Texas farmers and ranchers to prosper on their land again.

Farmers’ markets and community-supported agriculture programs are sprouting up in cities and towns all over the state as small farmers tap into the public’s interest in eating fresh, healthy, local food. For instance, there are now six farmers’ markets in the Austin metro area every week – Downtown, Sunset Valley, and Barton Creek on Saturday mornings; HOPE on Sunday afternoons; the Triangle on Wednes-day afternoons; and Truck Farm on Thursday afternoons – in addition to neighborhood farm stands (Boggy Creek, Springdale, Green Gate, Angel Valley), organic delivery services (Greenling, Farmhouse Delivery), and CSAs too numerous to mention.

Restaurants all over the state host more winemaker dinners every year, educating the public about wine and food pairings and introducing them to vintners who produce the wines they love.

The foundation is now a separate entity from the festival, and it funds nonprofit donations, grants, and scholarships with four major fundraisers every year. The foundation provides grants for projects as diverse as the development of children’s TV programs and software to diagnose wine diseases, in addition to the annual Stephan Pyles Scholarship Cook-Off competition ($15,000) and an annual pastry scholarship worth $5,000.

19. The Wine Roads of Texas on PBS

KLRU developed several segments of this wine travelogue, based on Wes Marshall’s book of the same name, with the financial support of the Wine & Food Foundation of Texas and H-E-B. Texas wineries are very telegenic with inviting voiceover work by Asleep at the Wheel’s Ray Benson. Sales of the DVD benefit the station.

The annual Texas Sommelier Conference, supported by the Wine & Food Foundation of Texas and statewide wine distributors, provides opportunities for Texas wine professionals to increase their knowledge and hone their skills, delivering better wine sales to restaurants and retailers and better service to the wine-buying public.

More of everything about wine and food: information, research, recipes, travel advice, gossip, blogs, politics, you name it.

It’s arguable that the economic development trail blazed by the burgeoning Texas wine industry paved the way for legislative support for the development of microbreweries, brew pubs, and distilleries around the state.

From Monica Pope in Houston to Sharon Hage and Graham Dodds in Dallas and from Jon Bonnell in Fort Worth to Jason Dady in San Antonio, farm-to-table restaurants focusing on fresh, local, seasonal foods are all the rage. Here at home, we can boast the locavore influence at such eateries as Kerbey Lane Cafe, Wink, Olivia, Texas French Bread, East Side Show Room, Jeffrey’s, ASTI, and FINO.

The Four Seasons has been home to the Texas Hill Country Wine & Food Festival for years, but spreading events around Austin and the surrounding countryside has proven to be a good idea. We discovered the Texas Disposal Systems Exotic Game Ranch is a great place for a late-afternoon barbecue, and the rooftop plaza at Whole Foods Market throws an attractive reception on a lovely spring day. The Long Center mezzanine is the perfect new home for the big Stars Across Texas Grand Tasting, and the Sunday Fair is once again comfortable at home in the Salt Lick Pavilion.

Texans don’t really need encouragement to boast about our state. Embracing and sharing our authentic regional Texas cuisines – the Tex-Mex dishes that evolved in the kitchens of early Hispanic settlers, the specialties brought to the table by our ancestors from the American South, plus the German/Czech, Old West, and African-American styles of barbecue we know and love – is a valued expression of our cultural heritage. We do it with pride! 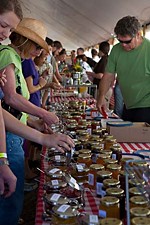 Texas Hill Country Wine & Food Festival Sunday Fair
The festival concludes, as always, with the Sunday Fair, where there's something for everyone