Local farmers' markets let us know that spring has arrived

Tweet
print
write a letter
The last Saturday in March was a perfect morning for farmers' market shopping, and all three markets we visited – Downtown, Sun­set Valley, and Barton Creek, were busy and vibrant, attracting scores of enthusiastic shoppers. I came home with plump artichokes and tender asparagus – perfect for spring. Another harbinger of spring is the reopening of the weekly farm stand and Community Supported Agriculture program at Green Gate Farms (8310 Canoga, 949-9831, www.greengatefarms.net). Due to the cultivation of new acreage along the Colo­ra­do River, there are plenty of both work and delivery shares available for purchase in the spring CSA, and the farm stand is open on Fridays from noon to 6pm and Saturdays from 10am to 2pm, selling organic vegetables, fresh eggs, chicken, beef, pork, and lamb. It's a worthwhile shopping destination... Be sure to watch for Austin chef James Holmes preparing a spring dinner during the fourth hour of NBC's Today show on Tuesday, April 6. Holmes and his crew from Olivia (2043 S. Lamar, 804-2700, www.olivia-austin.com) will be winding up a week of Big Apple appearances, including the preparation of an authentic Austin farm-to-table dinner at the James Beard House on April 1. And speaking of Central Texans on national TV, did you happen to catch the Travel Chan­nel's Food Wars segment featuring the infamous barbecue family feud in Lockhart last week? Father and son Rick and Keith Schmidt of Kreutz Market faced off against family members Nina Schmidt Sells and son John Fullilove of Smitty's in a blind taste test of their brisket and sausage. Among the five judges were Austinites Rob Balon, Wyatt McSpadden, and "Barbecue Bob" Cole. Though Cole swore he preferred brisket from one shop and sausage from another, he ultimately broke the 2-2 tie in favor of Kreutz. Then it was revealed that McSpadden had voted for the brisket from Kreutz and the sausage from Smitty's, which would render the actual voting too close to call, in my view. Either way, I'd love to see either or both of them represented at the Barbecue Crash Course next March... Food lovers will want to tune in to the nationally syndicated food radio program The Splendid Table, which is currently in the midst of a six-week trial run on KUT, Sundays at 11am through April 26. If you'd like for the show to become a regular in the KUT lineup, go to www.splendidtable.org and vote "spatula up"... Local nonprofits that would like to raise their public profile and earn some money while performing an important public service will want to take part in Eastside Cafe's Recycling Challenge at Art City Austin the weekend of April 24-25. Volunteer challenges and contest rules are available at www.eastsidecafeaustin.com/recyclingchallenge. Sign up now!... In the off with our heads department, in last week's profile of local cheesemongers Kendall and John Anto­nelli, MM Pack identified them as graduates of George Washing­ton University when, in fact, they are alums of Georgetown University who "bleed Hoya blue!" We regret the error.
More Food-o-File columns 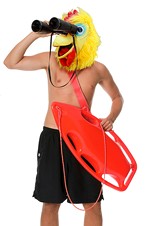 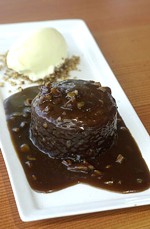 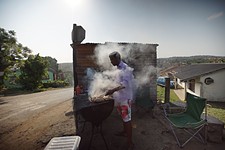 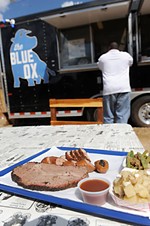