A turf war yields more farmers' markets for everyone

Tweet
print
write a letter
The column I had written about all the interesting food events sprouting up around South by Southwest got blown right off the screen when the phone at my home office began ringing about 9:30am this past Saturday morning. Both vendors and shoppers from the Sunset Valley Farmers Market were calling to tell me about signs at booths around the market announcing that it would relocate to the northeast corner of Barton Creek Square mall on March 20 and henceforward would be known as the Barton Creek Farmers Market (www.bartoncreekfarmersmarket.org, 280-1976). Market manager Salila Travers confirmed the move, telling me, "Everything will be the same – about 95 percent of the vendors will be moving, we will still be open from 9am to 1pm every Satur­day morning, and we'll have plenty of parking for our customers." But the more calls I took and the more questions I asked over the course of the weekend, a bigger picture began to emerge. It appears that trouble has been brewing between SVFM management and many of the farmers and vendors since the market lost its lease on the Austin ISD Toney Burger Center parking lot last year. Within the last couple of months, a contingent of vendors approached the Sustainable Food Center, operator of both the Austin Farm­ers' Market Downtown and at the Triangle, asking them to apply for a permit to operate a market in Sunset Valley. SFC employee and market manager Suzanne Santos confirmed that account and directed me to www.austinfarmersmarket.org/blog for an explanation. The Sustainable Food Center has received a temporary permit to operate the SFC Farmers' Market at Sunset Valley starting March 20, and it hopes to have a permanent permit confirmed by the Sunset Valley City Council on April 6. "I have pledges from 50 vendors, mostly farmers, but some artisan food producers and a few craft artisans, to continue at Sunset Valley, and we'll be there," Santos assured me on Saturday. At press time, there was no way to tell how many vendors would show up at which market – some folks I spoke with hoped to stay at Sunset Valley, others planned to move to Barton Creek, and a few hoped to set up booths at both locations. I know I'll be checking out both markets on March 20 and interviewing Sunset Valley city officials in order to provide more thorough coverage of the situation in the coming weeks... Another issue that has both artisan food vendors and market shoppers concerned is the recent opinion by the city of Austin's legal department regarding whether or not vendors can continue to prepare and sell hot food at the market using a temporary food event permit. According to the ruling, farmers' markets do not qualify as temporary events, and temporary permits will not be issued after April 1. At that time, artisan food producers such as Dai Due would need an unrestricted mobile vendor permit and an enclosed vending unit with sinks in order to prepare and sell hot food at the market. More on this soon... Meanwhile, a brand-new farmers' market has opened in West Lake Hills – check out the Truck Farm Farmers' Market at the corner of Bee Caves Road and Capital of Texas Highway, in front of Pots & Plants Garden Center (5209 Bee Caves Rd.), Thursday afternoons, 3-7pm.
More Food-o-File columns 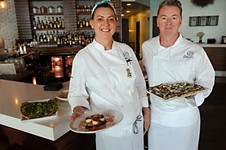