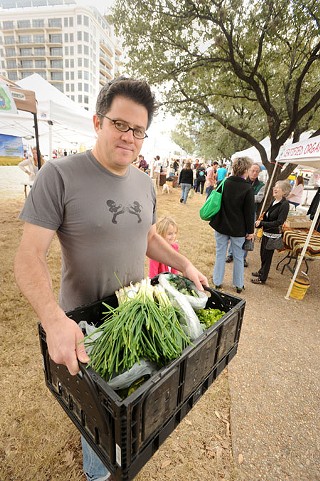 Watching Talia and Lucy Willcott scamper across the Texas French Bread parking lot to enjoy the playscape installed by their father and uncles reinforces my idea that this is essentially a story about family. The bakery was founded by the girls' grandparents Judy and Paul Willcott and is now run by their father, Ben, 40, and their uncle Murph, 48. Children of a linguistics professor, the Willcott brothers grew up around their mom's bakery, a business that evolved from Judy Willcott's love for classic French cooking and her habit of making rustic country breads and sharing them with friends. Judy opened the first Texas French Bread retail location at 34th and Guadalupe in 1981, back when Austin rents were famously cheap ($300!), salaries were low, and shops offering French bread, pastries, and excellent coffee were rare in the University of Texas campus area.

The original Texas French Bread was part of a 10-year Austin culinary renaissance that included the opening of Anderson & Company Coffee, Sweetish Hill Bakery, Jeffrey's, Fonda San Miguel, Basil's, Chez Fred, and Whole Foods Market. The young business flourished, and after her divorce, Judy began to expand. All of the branch spaces were rented, except for the 1939-vintage neighborhood grocery building at the corner of 29th and Rio Grande that had achieved Seventies music-venue icon status as the Rome Inn. Judy bought the building over the protest of advisers in 1985, not realizing the purchase would ultimately provide the secure foundation for the next generation of the family business. The spread of the neighborhood locations was based on customer demand and affordable real estate. By 1995, there were country baguettes, Hobbit Bread, Hyde Park Fudge Cakes, sandwiches, and coffee in 11 Texas French Bread outlets around the city. 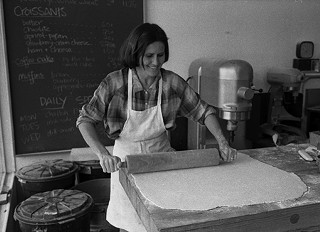 But that 1995 version of Austin was changing rapidly. Homegrown Whole Foods had gone national in a big way, and H-E-B had chosen Austin to debut its new Central Market concept – both featured big, in-house bakery operations. Starbucks had arrived, and local neighborhood coffee shops, carts, and kiosks were also blossoming, especially in the UT campus area. And perhaps most significantly, the local dot-com bubble began to enlarge, bringing with it national attention, job growth, career diversification, a higher standard of living, and real estate speculation. Even though that bubble burst during the decade from 1995 to 2005, rents and salaries continued to climb, but the retail prices of a baguette, a sandwich, or a slice of cake had limits. Murph Willcott provides an example, explaining that "when Judy signed the lease on the South Congress space in 1992, the rent was $1,500 and there wasn't any competition in the neighborhood. The last time the lease was up for renewal, they were talking $5,000/triple net, and there were pastries, coffee, and sandwiches for sale everywhere you looked up and down the street. The price of a baguette started at $1.25 and went up to $2. It just didn't make sense for us to pay the higher rent for a diminishing return." Murph and Ben Willcott took over in 2001, guiding the company through a Chapter 11 bankruptcy filing that closed several stores but saving the core business. In fall 2009, they closed the last two satellite outlets and consolidated the entire enterprise in the building Judy had wisely purchased in the Eighties. The brothers have spent the past couple of years figuring out how to put their personal stamp on the next generation of the family business, using Judy's bread, the staff of life, as a foundation and springboard.

Though all three Willcott brothers spent time working at Texas French Bread growing up, Murph and Ben took differing routes away from and back to Austin. (Youngest brother Matthew "Teo" Willcott managed his share of Texas French Bread outlets but has been working for Apple for several years now.) Murph followed a UT Plan II degree with one from Harvard Law School ('93, where his studies overlapped with Bar­ack Obama), but he worked in high-profile New York restaurants before, during, and after college. He went on to work for large law firms in both New York and California but says now, "I kept looking for that 'fun' legal career and just never found it." Murph's current job does not require a suit and tie. Ben attended college on both coasts before finishing an English degree at UT and worked at restaurants in both New York City and San Francisco during his studies. He then parlayed his English degree into a job teaching English as a second language in Taiwan and traveled extensively in Southeast Asia, India, and even South Africa. "The chance to experience food from the various regions of China in Taiwan, getting to shop the markets all over Thailand, it was all so amazing, an inspiration," he recalls. After his return to Austin, Ben freelanced for The Austin Chronicle's Arts section and worked for Dell before joining the family firm.

Once the brothers took over from Judy, the next step was to develop a business model that would reflect their tastes and interests while maintaining the loyal, established Texas French Bread customer base. "What it came down to was deciding what we could do that would be fun for us, that would also attract new customers to the store," Murph explains. Ben had often lobbied for a restaurant but is quick to point out that "we didn't want to come up with a business plan, borrow a bunch of money, and open up some corporate theme park. We decided to take a more homegrown, organic approach." About two years ago, they started hosting experimental supper club events with menus based on local meats, cheeses, dairy products, and organic produce, paired with bread and desserts from the bakery. "It's really simple, humble food based on quality ingredients, very much inspired by French country cooking but adapted to our local climate and growing seasons," Ben says. 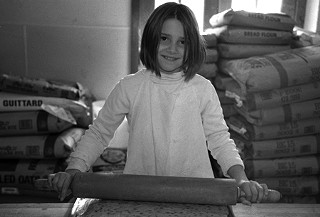 The response to the supper clubs was so encouraging, the brothers began to serve dinner at the bakery a few nights a week with minimal adjustments to the space: simple changes in lighting, long cafe curtains made from Home Depot drop cloths, soft music, and votive candles on the tables. Voilà, you've got yourself a neighborhood bistro! Once again, the Willcotts used a homegrown, Austintatious approach to the project. All the marketing consists of very personal weekly e-mails from Murph describing how the results of Ben's market shopping excursions will show up on the menu. (These are fun to read whether you make it in to the restaurant or not.) They have a kids' menu and added the aforementioned family-friendly playscape and outdoor dining area to attract more families to dine early on Wed­nes­day evenings, when the weather permits. And in true Austin fashion, they offer live musical performances. Dinner guests have enjoyed the cabaret stylings of Kara Bliss, Twenties and Thirties klezmer tunes from Bruce Salmon's the Inheritance, and Tango Tuesdays when maestro Glover Johns Gill provides skilled piano accompaniment to enthusiastic tango dancers on the family grand piano, on loan from Judy's house around the corner.

Both brothers admit the nighttime bistro is still very much a work in progress. "We want to keep it small, local, sustainable, and responsible," Ben explains. One of Murph's most important goals is to present a menu in both the bakery and the restaurant that's at least 75% locally sourced, and he's making serious progress toward that goal. Inspired by the works of Michael Pollan, Murph is also doing his best to weed out products containing antibiotics and growth hormones, and he would love to get rid of everything containing genetically modified organisms (the GMOs in corn and soy products), but that's currently a very tall order. Long-range plans call for obtaining a beer and wine license for the bistro, but compliance with Texas Alcoholic Beverage Commission regulations will require some improvements to the 71-year-old building that are currently not in the budget. Until there's a permit in place, the bistro charges a nominal corkage fee, and many guests enjoy being able to peruse the menu online and bring their own wine selections.

Meanwhile, Murph and Ben are proud of their relationships with area farmers and ranchers, listing suppliers' names on the changing weekly menus. There's chicken from Dewberry Hills Farms; produce from Boggy Creek Farm, Angel Valley Organic Farm, Gunder-mann's Farm, Harvest Time Farm, and Amador Farms; lamb from Loncito; occasionally bison from Thunder Heart; beef from Bastrop Cattle Company; pork from Burgundy Pastures; and fresh fish from another old Austin family business, Quality Seafood Market. They also buy from John Lash's local foraging operation, Farm to Table, from time to time. Ben shops all the farmers' markets every week, letting the seasonal produce direct his menu selections and inspire his cooking. This is not some outfit that buys a handful of local produce every week and jumps on the "farm-to-table" bandwagon because it's a trendy marketing tool. The proof here is on the plate. The food is not particularly sophisticated, but it has heart, and it's made with love and pride. What could be more exquisite than a lightly dressed salad lyonnaise made with Boggy Creek greens; crisp lardons of local bacon; a brilliant orange-yoked, farm-fresh egg; and rustic Texas French Bread croutons?

Progress with the bistro project may be slow, but the Willcott brothers are hopeful. "We're still pretty much under the local radar over here, but sales are a little better each month," says Murph. He's pleased that the restaurant's sales now account for 25% of the business revenue. And he fervently hopes the current generation of Texas French Bread will make a culinary contribution that is as significant to Austinites as what his mom did in the Eighties. Imagine the pride both these sons of Austin felt when a recent dinner customer told them enthusiastically, "This place is just like the Austin I grew up in!" 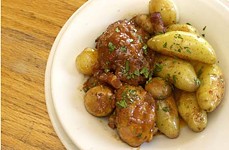