A healthy, homegrown snack debuts in the new year 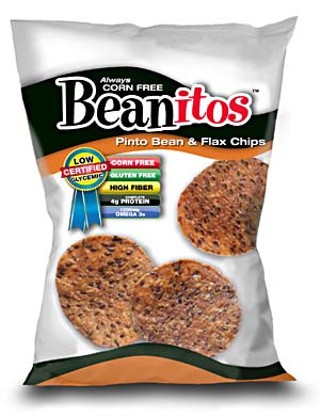 I'll admit it – I did my very best to resist Beanitos in the beginning. When our receptionist told me the publicist for a local company had dropped off bags of new healthy snack chips with some salsa, my immediate reaction was to regift them to the Chronicle front-of-the-house staff. The term "healthy snack chips" evoked memories of flavorless pieces of baked cardboard (actually corn or potato) chips, and I couldn't have been less interested. However, the publicist persisted, and when my young friend at the front desk described the new product as "surprisingly edible," I relented and agreed to give Beanitos a shot. Now, I'm hooked.

Beanitos are the newest healthy snack to emerge from the fertile imagination and creative kitchen of local entrepreneur Doug Foreman. For those who don't recall, Foreman was the creator of another local snack product, Guiltless Gourmet Baked Tortilla Chips, which he launched from Austin in 1989. Foreman developed the baked tortilla chips when doctors advised his dad to reduce the fat in his diet after a heart attack. Doug beat all the major snack food manufacturers to the market with his baked chips and eventually sold Guiltless Gourmet to Barq's Root Beer in 1994. He was inspired to create Beanitos in much the same way, he revealed when we spoke last week. "I was looking for a way to lose some weight at about the same time I started noticing all the research about the overabundance of corn in all processed foods and how all the empty carbohydrate calories in the American diet are contributing to the obesity problem," he told me.

Foreman began looking for a snack-food base that would be corn-, potato-, soy-, and wheat-free, and hit on beans as the proper alternative. "The first bean we tried was one called chana dal that is a staple of Indian cuisine, but we were concerned that Americans might not recognize it, so we kept looking for something more familiar," he recalls. After the recent explosion of Hispanic foods on the American market, black and pinto beans seemed like a very good bet. Both are low on the glycemic index, high in fiber and omega-3 fatty acids, and rich in protein. Beanitos are the ultimate result of Foreman's quest – a high-fiber product with two-and-a-half times the protein of corn or potato chips, plus excellent crunch and good flavor. The new chips are made from black or pinto beans (with flaxseed) combined with whole grain rice to create dough that's cut into rounds and oven-baked, then flash-fried in vegetable oil before being dusted with sea salt. The two original flavors are rolling out now, and a third – all-natural Nacho Cheese Beanitos – is not far behind. Other flavor options are still in development.

So, the background research and nutritional information Foreman presents with Beanitos all sound promising and there are plenty of folks with dietary restrictions (diabetics, celiac sufferers, etc.) looking for healthier snack food alternatives, but the proof would have to be in the eating. How do they taste? I found both varieties crisp and crunchy with hearty flavor under a light dose of salt. The round chips hold up well as a vehicle for dipping in salsa and chile con queso and make a worthy base for nachos. One of the best aspects of Beanitos is their high fiber content, which makes a smaller serving of them more filling than the average empty-calorie bag of corn or potato chips. (Foreman also shared samples of the soon-to-come cheese flavor, and those could be the best of all.) As a food editor who evaluates all kinds of prepared food products, I'm impressed; as a snack food lover with both diabetes and a weight problem, I'm sold.

Foreman and his team threw a big Beanitos launch party at the Long Center earlier this week, complete with a corn-chip-eating cow and a WWF-inspired smackdown between a giant cornstalk and a giant bean. Guests were encouraged to actually "kick the corn" from their diets using footballs decorated to look like ears of corn! Look for both bean varieties of Beanitos ($3.99 per bag) at all Texas Central Market stores and several local neighborhood markets now. H-E-B, Whole Foods Market, and Sprouts Farmers Market will be carrying them in the near future.