Mandola’s Grocery, 1936, Houston: Damian’s grandfather Vincenzo “Vincent” Mandola is at right. Check out the meat case. This is very typical for Italian groceries of that time. It’s clear from dozens of pictures of Houston groceries from this same time period that it’s the meat case that sets the Italian grocers apart. (Courtesy of Damian Mandola)

If it is possible for a profession to be in the blood, then this certainly is the case with Damian Mandola. The third-generation Texan of Sicilian ancestry has been in the restaurant business since he was a senior at Sam Houston State University. In 1975, uncertain of what to do with his life after college, Damian and a friend borrowed $2,000 each from relatives to open a pizzeria in Hunts­ville, Texas. The restaurant was called Damian's Fine Italian Food, and it was so successful that after a couple of years, Damian and his partner, Nash D'Amico, decided to try their luck in their home city, Houston. They opened D'Amico's Ristorante Italiano in 1977. Damian eventually sold that in 1984 and with his cousin Frankie B. Mandola opened Damian's Cucina Italiana, a casual fine-dining restaurant specializing in Italian cuisine. "During those early years in Houston," Damian explains, "we didn't know much about the restaurant business, or even Italian food, other than what our mothers cooked. Every­thing was in tomato sauce."

But one day, Tony Vallone, the Houston restaurateur best known for the A-list establishment Tony's who also happened to be a friend of the family, gave Damian a cookbook by Giuliano Bugialli. "It opened my eyes to a world of Italian cuisine I never knew existed," he says. Since then, Damian has traveled extensively, not just around Italy but to Little Italys throughout the United States, exploring the tastes of his heritage. Those culinary adventures became the inspiration for his current restaurant endeavors in Austin, Mandola's Italian Market and Trattoria Lisina, which he shares with his grown sons, Damian Jr. and Dominic, and his wife, Trina.

I'm sitting in the new Mandola's Italian Market at the Hill Country Galleria in Bee Cave discussing those early years in Houston with Damian. His roots are deep, and his social and familial connections to the food business are no less than Byzantine. What strikes me most is that Damian knows just about everyone who is anyone in the restaurant business in Houston. His family members alone occupy conspicuous territory on the Houston scene. There's his older brother Vincent, who owns Nino's Restaurant, Vincent's, and Pronto Cucinino; then there's his cousin Frank A. Mandola, who owns Mandola's Deli on Leeland Street, which has been in operation for more than 30 years. When Damian sold his share in Damian's Cucina Italiana, it was to Frankie B. Mandola and Bubba Butera. Damian's cousin Ciro owns Ciro's Italian Grill, and another cousin, Josephine, owns Josephine's Italian Ristorante, both in Houston. Tony Mandola, his next oldest brother, is the force behind Tony Mandola's Gulf Coast Kitchen and Blue Oyster Cafe. His wife's mother is Ninfa Laurenzo, the late dowager of the Ninfa's restaurant chain. And let us not forget Damian's nephew Johnny Carrabba, with whom Damian partnered to start Carrabba's Italian Grill in 1986. Johnny cut his teeth managing the Blue Oyster Cafe for Tony. Together Damian and Johnny took Car­rabba's national, spawning a restaurant empire that's still going strong, though Damian has since sold his active in-terest in it. This only scrat-ches the surface. The fact is, Damian Mandola and his family are so en-twined in the food business that to really untangle their story, we have to look back more than 100 years.

From the Old Country

The story begins in Sicily. Damian's ancestors were from Bisacquino, an agricultural town in the province of Palermo. The name Mandola, according to Damian, comes from the phrase manda là, meaning "take it there," which effectively sums up the social status of his ancestors. Like so many of the Italians who immigrated to the United States at the turn of the last century, they were peasants with no capital, no education, and no chance of mobility within an exceedingly stratified social system. At that time, Italy, and Sicily in particular, was deeply impoverished. The agricultural system was failing, towns had no public works, and only one in 10 adult men even knew how to read and write. Consequently, huge numbers of Sicily's inhabitants took a chance crossing the Atlantic to make lives for themselves with better opportunities. While this immigration tale is already well-documented for northeastern cities, it is less well-known that Sicilians also came in large numbers through the port of Galveston, settling not only on the island but in other cities around Texas. Houston and Beaumont were among the towns with the largest Italian immigrant population. Damian's grandfather, Vincenzo "Vincent" Mandola, settled in Houston in the late 1890s.

Many of the first Sicilians to arrive in Texas took jobs as farm laborers because this was what they were most familiar doing. Soon, enterprising immigrants began selling their produce in the markets, and as they acquired capital, they opened small corner grocery stores. They established mutual aid societies, and as others arrived, they set them up not only with jobs but also seed money to start their own stores. According to the Houston City Directory for 1907, 13% of all grocery stores in Houston were owned by individuals with Italian surnames.

Damian's grandfather, Vincent, and his great uncles, Frank and Giuseppe, were among those who opened such stores. Vincent's was located in Houston's near east side and stocked canned goods, fresh fruits and vegetables, and household supplies. But, as was common for many Italian grocery store owners, Vincent also sold Italian cheeses and deli meats, such as prosciutto, salami, and pancetta. For the Italian immigrants who came to America in the early 1900s, food and cooking were (and remain for their descendants) essential components of social life. The immigrants who came to Houston maintained their culinary traditions, just as they did in such places as New York or Boston. However, the effect Italian immigrants had on Houston's culinary landscape was more diffuse than in northeastern cities. Houston has never had a Little Italy, but scattered in neighborhoods throughout the city, Houston's Italian groceries fostered the growth of small food empires. Damian recalls one man who parlayed his corner grocery into a pasta factory; another went door-to-door selling olive oil and cheeses. His own father started a meatpacking business, which ultimately failed after an untimely accident.

"There was al-ways a stove in the back of all the stores where the women would cook," muses Frankie B., who recalls making Italian sausage in the back of his parents' store. "Our grandmothers would cook these huge Sunday meals for 50 or 60 people; our friends couldn't believe it." It was only natural for some of the sons and daughters of grocery store owners to start serving the recipes of their parents in a cafe setting. This was the case for Damian's cousin Frank, who in the 1970s turned his father's corner grocery in Houston (pictured above) into Mandola's Deli, a cafeteria-style eatery serving the dishes of his childhood. That's about when Damian's Fine Italian Food was opening in Huntsville, and other family members followed suit as well, despite their parents' efforts to send them to college and into new professions.

To the Hill Country

It was only appropriate that after selling his interest in the Carrabba's chain, Damian looked to his roots for his next endeavor. He had always wanted to open a traditional Italian market selling baked goods, deli meats, and cheeses. But if Damian Mandola understands anything, it is the food business, and his instincts told him that a traditional Italian market could never succeed on its own in Texas. So he paired the market concept with a restaurant serving casual Italian fare, heavy on Sicilian-style pastas, salads, and pizzas. Presto! Mandola's Italian Market. He chose Austin as the place to try it out in part so that he could fulfill his other lifelong dream of opening a winery with his wife, Trina. That venture spawned another restaurant, Trat­toria Lisina, modeled on the casual fine-dining restaurants he operated in Houston.

Damian admits that his market concept is unlike the grocery stores his grandparents, aunts, and uncles used to run. Both the Triangle and the Hill Country Galleria stores have a corporate polish his grandparents' store never had, but they also have an undeniable authenticity – an amalgam of the restaurants, bakeries, groceries, and delis Damian has encountered throughout his travels. At Mandola's Market, the bakery case alone offers dozens of different cakes, tarts, and cookies, all of which are made daily in the kitchen at the Triangle. You'll find treats there – such as pine nut cookies and luscious, three-layered amaretto cookies – that you'd be hard-pressed to find anywhere outside the northeast. There's a case selling homemade gelato, as well as a refrigerator case selling Italian cheeses, anchovies packed in salt, and other delicacies. Not to mention the restaurant, which puts out some of the best family fare in town.

The concept is clearly one that resonates with Austin consumers. The Triangle location is generally packed at meal times. So far business at the new Galleria location is just as promising, and a third location is scheduled to open next year near on South MoPac. Certainly, Damian has come a long way from his grandparents' store in Houston. But his heart is indisputably Italian-American. 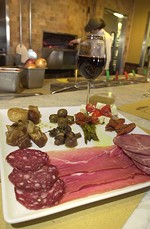 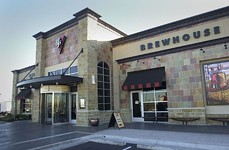