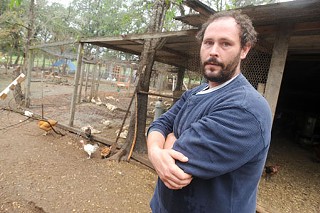 Deep in the woods between Austin and Bastrop, Sebastien Bonneu of Countryside Farm raises animals for meat. Not the usual beef or goats found in Central Texas, but rabbits, ducks, geese, chickens, guineas, and pigeons. A former chef reared on a farm near Bordeaux, France, Bonneu espouses European sensibilities and methods for husbanding, harvesting, and purveying small domestic animals on a nonindustrial, human scale, and his customers at farmers' markets and upscale restaurants in Austin and Houston appreciate the results of his labor.

And labor it surely is. At any given time, Bonneu is responsible for the care of more than 1,000 animals. In addition to feeding, breeding, and raising his various flocks, he is assisted by part-time helpers (and occasionally by Austin chefs who come to hone their butchering skills) as he harvests and hand-processes animals each week in a U.S. Department of Agriculture-certified facility located on-site.

"In rural France," Bonneu says, "it's normal to keep small livestock for personal use or to barter with neighbors. Here, I'm carrying that tradition one step further. My customers know where this meat came from, what it ate, and how it's been raised ... and that there's no waste." 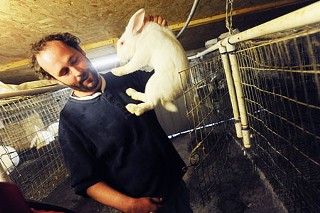 When you round the last turn of the dead-end dirt road, Countryside Farm appears to be a pastoral landscape dotted with whitish tufts that resemble nothing so much as oversized cotton balls. On closer approach, these tufts turn into large birds, peacefully foraging around several acres of pasture. By the time you reach the farm gate, at least one flock of self-important geese is vigilantly clacking over to ascertain whether the visitor is friend or foe.

Along with several varieties of chickens (Red Broiler, White Rock, French Bresse, Speckled Sussex, Cornish Cross, and the disconcertingly bare Naked Neck), the geese and ducks roam around the farm at will. They nibble green shoots, snack at feed boxes, negotiate mud puddles, and paddle in the farm's two ponds. Wild birds occasionally join the scene; Bonneu points out a beautiful, sleek, ring-necked duck, contentedly foraging alongside his much meatier domestic girlfriend.

In the farmyard, large groups of black-and-white speckled guineas dash noisily about in large fenced compounds, segregated by age and size. The mature ones are about the size of small wild turkeys. Cooing pairs of plump white King pigeons, mated for life, tend their eggs and offspring in special areas of stacked cotes. Baby and adolescent chicks and ducklings cluster together in pens until they're old enough to look after themselves out on the (free)range.

The rabbits are probably the most labor-intensive inhabitants of the farm. They reside in hutches in a climate-controlled barn, where Bonneu can keep them cool, comfortable, and well-ventilated. "Texas heat is the biggest trouble for rabbits," he says. "And they're very sensitive to dirty air. But if you keep your barn clean, there's no need for antibiotics." As he systematically develops his breeding stock of California, New Zealand, and Flemish Giant rabbits, Bonneu maintains records and calendars for each doe. And he's particularly proud of big old Chuck the Buck, whom he describes as an "almost perfect" specimen with good genetics for siring healthy litters. If rabbits played football, Chuck would be the fullback.

Today, the rabbit barn contains about 20 does, three bucks, and lots of baby rabbits jumping around. Bonneu is planning to increase the breeding stock to at least 50 does, and he's negotiating for an additional building to house them. As far as he knows, Countryside is the only farm in the area raising rabbits commercially. Rabbit consumption is common in other parts of the world, but it hasn't been very popular on U.S. tables, at least since the Depression of the 1930s. However, Bonneu has seen a definite increased interest recently. "Right now, restaurants buy almost all the rabbits I can produce each week. I want to have more for the market customers; people are always asking. And 4-H and Future Farmers groups want show rabbits for students."

Bonneu first came to Texas in 1998 after completing his baking apprenticeship and certification in Bordeaux at age 21. "I wanted to work outside the country, and my boss knew some French people opening a bakery in a place called McAllen, Texas. I looked on a map, I saw it was near Mexico and near the ocean, so I thought, 'Why not?' That's all I knew when I arrived. The climate was a little shock."

After the bakery folded a year later, Bonneu returned to France but realized he'd left his heart in Texas; within three weeks, he came back to the Rio Grande Valley and his future wife, Esther Bonneu-Alvarez. Shortly thereafter, while on a visit to Austin, he met Jean-Luc Salles of Jean-Luc's French Bistro, who just happened to be in the market for a pastry chef. Within a day, Bonneu had the job, and he remained at the bistro for several years.

Later, while cooking at Vespaio, Bonneu and fellow chefs Ryan Sampson and Jesse Griffiths (now of Dai Due) got together to slaughter and process a whole pig in best nose-to-tail tradition. One thing led to another down this path, with Bonneu reprising his early farm training to continue processing meat. Eventually he decided that he preferred raising and purveying animals to baking. "I worked in restaurants; I knew chefs wanted access to fresh local meat that's lived well and eaten good food."

Almost three years ago, he and his family (which now includes not-quite-4 Margaux and baby Benjamin) acquired their 7.5-acre farm property east of Austin. Leaving the oaks to provide shade, Bonneu has systematically cleared about half the acreage of cedar and brush, using the chipped wood for bedding and pathways. He continues with clearing the rest of the farm and eventually would like to double its size. "I haven't had a vacation since we started," he says, "but I can go fishing and hunting sometimes. When I just cut wood and don't process meat, it feels like a day off."

Another ongoing project is building the self-contained dwellings with fenced yards to house and protect the various flocks of babies. Although he'd learned animal husbandry growing up, "I never built a house before; I was a chef," he laughs. "It's slow." Such protection is critical to the business, however; local predators include crows, raccoons, gray foxes, coyotes, and bobcats. (Bobcats within 30 minutes of the city limits? Who knew?)

In addition to the animals he raises, Bonneu also harvests destructive feral hogs that ravage his neighbors' properties near the farm. They're not exactly the wild boars of rural France, but they don't taste like domestic pork, either. He takes them when they're still relatively small and has them processed into table cuts at a local facility (he isn't licensed for pork processing).

Bonneu says he doesn't miss his chef days, though he does aspire to use his meats to prepare the French-style confits, terrines, and pâtés that his family made when he was growing up. "Other people are doing that here," he says. "But it isn't the same." That's certainly something for customers to look forward to.

On Saturdays at the Downtown Austin Farm­ers' Market, Countryside Farm has a loyal following. Bonneu sells meats and eggs while sharing stories and photos of the farm and livestock. He's always ready to provide recipes and cooking methods (hint: low and slow) for his products. Prior to Thanksgiving, customers can look for ducks and geese (both whole birds and cuts like breasts and legs), guineas, possibly some rabbits, and cuts of wild pork (ribs, legs, and shoulders). Bonneu will be taking special orders throughout the holiday season; to place an order, call or text Countryside Farm at 512/363-2310.