The kitchen serves food until 1:30am, attracting a late-night dining crowd that makes for splendid people-watching 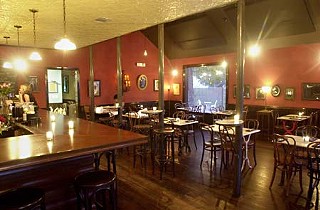 
When Pierre Pelegrin and his wife, Justine Gilcrease, decided they wanted to start their own business, their first idea was to open a bar. But the thought of a bar with no food seemed sterile to Gilcrease, who envisioned an environment more like her living room. So the couple created a menu based on French classics, thus beginning what seemed to friends and family to be an interminable process of converting a 1937 bungalow on East Fifth Street into a restaurant.

The buzz about Justine's went viral even before the restaurant opened. Pelegrin, a former waiter at Chez Nous, and Gilcrease, an artist, cast a wide social net, and news about their restaurant began percolating through the rumor filters months in advance. The business was so anticipated during the two years the couple spent remodeling that cars would drive by frequently to check on its progress. And since its opening two months ago, word about Justine's has spread faster than H1N1. Case in point: We arrived at 6:30pm on the Sunday after Halloween and were greeted with an hour wait for a table inside. By 7:30pm, both inside and outside eating areas were full with an hour wait for a table anywhere. Everyone is talking about Justine's.

Sure, Pelegrin and Gilcrease have done a great job transforming the interior space into a lively study in red and black, warmed by antique wooden tables and a cozy bar. Outside, tiny marble-topped tables surrounded by wooden folding chairs also make a charming impression. Guests crowd around these sipping Kir Royales and pastis, while others play pétanque on a crushed-granite patio. Sure, the crowd is international, urban, and chic.

But scene-mongering aside, Justine's is fundamentally a no-frills brasserie serving old-fashioned Gallic comfort food. The menu is unambitious, affordably priced, and it makes few promises that it can't deliver. Simple dishes such as steak topped with herbed butter, steak tartare, duck confit, and grilled pork chops form the backbone of the menu. Just about all the main dishes are served with homemade frites (that's french fries to us Yankees).

Justine's charcuterie plate ($14) is a good place to start. This usually features a trio of homemade pâtés and potted meats. Ours included excellent allspice-scented pork rillettes, a satiny liver pâté, and a country pork and duck pâté. The French onion soup is a fine example of a well-loved classic, made with beefy broth sweetened with caramelized onions and topped with a thick slice of French bread and melted Gruyère ($6.50). On the lighter side, the kitchen turns out a lovely endive, pear, and Roquefort salad ($8.50), though I was a little underwhelmed by the white asparagus drizzled with a sabayon ($6.50) that seemed just a little grainy to me.

Seared snapper served over lemony beurre blanc and crisp blanched green beans ($18) make a delightful main course. And I confess to practically drinking the strong celery and butter broth from the Moules Mariniere (with frites) the kitchen served for a special one night ($12). On another visit, I was disappointed at not having the opportunity to sample the duck confit ($15), which people tell me is excellent. Justine's had run out the night before, and its new batch was still more than an hour away. Instead I settled for the Coquilles St. Jacques Grillé ($16). In French, Coqilles St. Jacques typically refers to any dish containing scallops rather than a specific preparation. Justine's scallops are dusted in black pepper, studded with lardoons (bacon), skewered, and grilled en brochette. The skewers are served atop a bed of lightly dressed frisée, the mustardy vinaigrette of which cleverly balances the opulence of the scallops. Genius? No. Well-executed and satisfying? You bet.

There are only two regular desserts on the menu: crème brûlée and a pear-and-chocolate tart (both $5). These are both competent but not stellar, and a true dessertavore may leave feeling a little unsatisfied. They do prepare specials on weekends, though, and I was happily surprised by a delicious homemade ice cream topped with a tart currant syrup.

The kitchen serves food until 1:30am, attracting a late-night dining crowd from other restaurants. This makes for splendid people-watching. And it really does feel like a party in Pelegrin and Gilcrease's busy living room.