The Austin Convention & Visitors Bureau has hosted an annual cocktail contest for the last six years. At first, bartenders from five Downtown hotels were challenged to create a drink called "the Batini," and a panel of celebrity judges chose the winner. Now, bartenders from establishments citywide are invited to submit recipes for the Austin Cocktail Throwdown. This year, 24 local bartenders submitted original recipes, and a panel of judges made up of hospitality industry pros and food writers selected five finalists. The idea was to make a unique cocktail that is worthy of being called the Official Drink of Austin for the year. Originality, use of local ingredients, and flavors or concepts that represent Austin were encouraged. The winner was picked at a private event where bartenders showcased the drinks and passed around samples. Guests voted by filling out a ballot form, grading each cocktail on a scale of 1 to 5.

Two things have remained the same over the years: The drinks have to include Tito's Vodka (the contest sponsor), and competition is always fierce. La Condesa entered with a slightly modified version of its delicious watermelon and elder-flower martini, topped with an elder-flower-infused foam. The Hyatt Lost Pines Resort and Spa folks made a super-refreshing drink called the Shirley Bird using local ingredients (Good Flow honey and Nile Valley hibiscus-mint tea), lemon juice, and ginger liqueur. I loved the Lady Bird from Stephen F's Bar and Terrace, made with Paula's Texas Lemon, pear liqueur, elder-flower liqueur (is this the tres leches cake of mixology nowadays?), and fresh lemon juice and zest. The most intriguing cocktail of the evening was FINO's mole on the rocks, featuring a homemade mole syrup, Aztec chocolate bitters, Paula's Texas Orange, Treaty Oak rum, and allspice dram. But the Paggi House's Redbud got my No. 1 vote: homegrown mariachi peppers muddled with sea salt, mixed with grapefruit bitters, house-made grenadine, lime juice, and pomegranate seeds. So good! However, majority rules, and the bragging rights and prizes – including a Gibson guitar – went to La Condesa's Enlightened Austin Martini, the Official Drink of Austin until this time next year. Congrats! 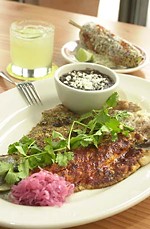 La Condesa
Neo-Mexicano has arrived in Austin via La Condesa