After sampling one of Casa Maria's fat, homemade flour tortillas, I began to perceive that looks can be deceiving 
Being a food critic, I often fool myself into thinking I know something about every restaurant in town. But every now and again, I'm reminded that despite my conceit, I don't have as firm a grasp on the tendrils of Austin's restaurant scene as I imagine. This was the case recently when, on the tip of some of my co-workers, I ventured into Casa Maria, a crowded Mexican cafe and bakery on South First.

From the looks of it, Casa Maria is nothing special – a drab, dark cafe in a smallish strip center. But after sampling one of Casa Maria's fat, homemade flour tortillas, I began to perceive that looks can be deceiving. The menu has all the typical dishes people have come to expect from a Mexican restaurant, but at Casa Maria, quality comes out in the details. Under less loving care the carne de puerco ($7.99), pork stewed in red or green sauce (we ordered the green sauce), might be tough, lack depth. But here, pork is slow-simmered and tender; the stewed tomatillo sauce is subtly accented with hominy. The steak tampiqueño plate ($14.99) – a steak accompanied by an enchilada, guacamole, rice, and beans – is tender and smothered in a firecracker ranchero sauce. A simple sopa de fideo ($4.99) arrives at the table steaming. The soup is a rich chicken-and-tomato broth laden with noodles, celery, and carrots. The refried beans are deliciously lardy, while the rice is well-flavored with tomato, bits of celery, and pepper.

I am confident I will return for the Enchiladas Oaxaqueñas ($8.99), filled with shredded chicken and a sprinkle of white cheese and snuggled under a red chile mole that is simultaneously nutty, fruity, and spicy, without cloying sweetness.

Next door to the restaurant, a bustling bakery displays colorful churros, sprinkle-coated sugar cookies, tres leches cakes, and other Mexican pastries. These too bear the stamp of care. The churros are fluffy, and the tres leches cakes are irresistibly drenched in sweetened milk.

"How long have you been open?" I asked the owner as I paid for my meal.

I was both humbled and dismayed that Casa Maria had eluded me for so long. Now that I know about it, you can bet I'll be back again. 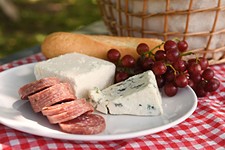 Dear Glutton: How to Step Up Your Picnic
Going beyond the typical bag of chips and cooler of beers