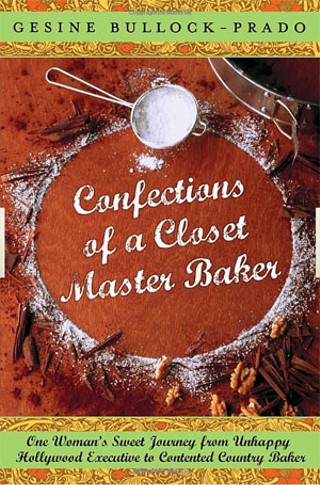 
At first glance, it would seem that I have absolutely nothing in common with Gesine Bullock-Prado. She's the tall, willowy younger daughter of a German opera diva and an American executive who spent her early childhood in Germany. She's also a former Hollywood development executive and the younger sister of a major movie star with strong ties to Austin. Despite our apparent lack of common ground, when I read about the deep satisfaction she derives from baking and sharing her baked goods with family, friends, and strangers, the baker in me recognized Bullock-Prado as a kindred spirit. I'm thoroughly charmed by her new book, an acerbic and poignant memoir that also includes some of her favorite recipes (though not the one for her signature almond macaroons).

I found it entirely believable that baking was her one salvation during a miserable, soul-sucking job among the shallow stick figures in Hollywood, and I applauded when she told of pulling up stakes and moving to rural Vermont to follow her own bliss. The book's most touching anecdotes deal with Bullock-Prado's relationship with her beloved mother, Helga. Baking is the devoted daughter's way of honoring the mother she lost to pancreatic cancer and maintaining their strong connection. Many of the recipes are inspired by poignant memories of Helga, and I can't wait to make her simple fresh plum tart (zwetschgendatschi) when plums are in season next summer. Meanwhile, I'll content myself with the divine nutmeg-scented Golden Eggs and the delicious maple-pecan sticky buns.

Talking Sugar With Gesine Bullock-Prado
How to not sweat candymaking, sugar