French, Indian, and Gulf of Mexico seafood newcomers; restyled Japanese surf with American turf; and postprandial treats for both humans and canines

Tweet
print
write a letter
It's September, and things have really shifted into high gear – hang on for a lightning round of news and events! Friends are already raving about Justine's (4710 E. Fifth, 385-2900, www.justines1937.com), the cozy, French-inspired bistro created by Chez Nous alum Pierre Pellegrin and his wife, Justine Gilcrease, in a 1937-era East Austin cottage, and the place has only been open a week. Can't wait to try it out. In the same general area of town, the Shuck Shack (1808 E. Cesar Cha­vez, 472-4242, www.shuckshack.com) is another new restaurant/bar from the same folks who are developing several spots in the Rainey Street neighborhood. The casual indoor/outdoor joint offers Gulf seafood and a full bar, plus horseshoes, dominoes, washers, and bocce ball in the former Azul location... Lake dwellers and Southwest Austinites are certainly in for some good eating – former Finn & Porter chef Chris Bauer is now at the helm of Mizu Prime Steaks & Sushi (3001 RR 620 S., 263-2801, www.mizuaustin.com), where he'll feature a New American menu enhanced by some Asian-inspired dishes, prime steaks, sushi, weekend brunch, and a full bar with a late-night appetizer menu... Meanwhile, in the Sun­set Valley area, look for the opening of Tarka Indian Kitchen (5207 Brodie #120, 892-2008, www.tarkaindiankitchen.com) by mid-September from some of the same restaurateurs responsible for the Clay Pit (1601 Guadalupe, 322-5131, www.claypit.com) Down­town. Tarka will offer counter service for fresh, healthy Indian food (including some vegan and gluten-free options) complemented by beer and wine, fresh whipped lassis, lemonade, and chai. It all sounds very inviting... We learned last week that one of contributing writer Mick Vann's favorite Asian eateries, Asia Cafe (8650 Spicewood Springs Rd. Ste. 114-A, 331-5788, www.asiamarketaustin.com), has moved out of its cramped quarters in Asia Market and into a much larger space in the same shopping center, where it will have the same great food in a much more congenial atmosphere... Fonda San Miguel (2330 W. North Loop, 459-4121, www.fondasanmiguel.com) founding chef Miguel Ravago was back in the country in late Aug­ust, hosting a weeklong seminar for the Fonda bar staff led by Spaniard Geray Rodriguez Ramirez, custom bartender of Spain's hip, high-fashion celebrities. In addition to staff training, Ramirez also developed some unique cocktails to complement Fonda's distinctive Interior Mexican cuisine... Ben May e-mailed with the news that Cake by Bridges has changed its name to Austin Cake Ball (826-4824, www.austincakeball.com), but its exquisite cake bites remain the same. Now the lovely and delicious little delicacies are featured as check-in amenities at Hotel Saint Cecilia (112 Academy, 852-2400, www.hotelstcecilia.com) and are for sale at Whole Foods Markets throughout the Southwest region... During the entire month of September, Austin's homegrown Kerbey Lane Cafes (www.kerbeylanecafe.com) will sell custom pet treats to benefit Austin Pets Alive and accept donations for the local nonprofit that promotes pet adoptions. They'll also be hosting "meet and greets" with adoptable pets from 11am to 2pm at the various locations – Sunday, Sept. 13, Central; Saturday Sept. 19, UT; and Saturday, Sept. 26, Northwest. 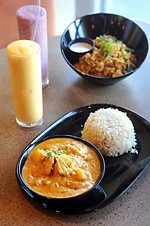