Austin burgers and bakeries are in good hands, and several foodie contests just wrapped up

Tweet
print
write a letter
Some of the loveliest and tastiest surprises at my annual potluck birthday bashes the last two summers were small custom cakes prepared by a former Driskill pastry chef named Shawn Bonifay, who sent them to the party with a mutual friend. Earlier this month, Bonifay joined two other former hotel pastry chefs, Mike Sentelli and Christina Hernandez, to open Sentelli's Specialty Cakes & Fine Pastry (814 W. 12th, 236-1720, www.austinsweets.com). The new shop inherits plenty of good baking karma from former tenants Rather Sweet Bakery and Sansalone's Specialty Cakes. Sentelli's offers several varieties of pastries; coffee; five flavors of cakes, either whole or by the slice; plus custom-designed cakes for weddings and myriad other special occasions. Now I don't have to wait until July for another good slice of cake!... When the sale of the Star Bar (600 W. Sixth) was announced earlier this summer, one of my first questions was, "What's going to happen to those great cheeseburgers from the Hat Creek trailer facing the patio?" Burger proprietor Drew Gressett assures me the burgers aren't going anywhere quite yet. "We'll stay put for another couple of months, and then this crew of employees will open our new store location at 5400 Burnet Road. When that's up and running, we'll look for a good new spot for the trailer and hopefully have it back in business sometime in December." In case you were wondering, the Burnet Road address is a former Arby's outlet, and the signature neon hat will make a perfect sign for the homegrown burger joint... Congratula­tions to local dessert maker Melody Thomp­son, winner of the 2009 Z'Tejas Chile Bash dessert contest. Her delectable Cayenne Fudge Brownie Z'mores with Patrón XO coffee liqueur will be raising money as a special menu item at Austin Z'Tejas locations Sept. 8-27... And while we're in congratulatory mode, kudos to Uchi (801 S. Lamar, 916-4808, www.uchiaustin.com) beverage director June Rodil, who was named 2009 Texas' Best Sommelier at the recent Texas Sommelier Conference in Dallas. Rodil triumphed over all competitors in rigorous testing based on wine tasting, service, and theory. She joins several other Austinites in winning this honor, which certainly reflects well on our local wine scene... Speaking of drinks – local mixologists have until Sept. 3 to submit original drink recipes for the Austin Cocktail Throwdown, where the city's signature cocktail for the coming year will be chosen. Recipes must include Tito's Handmade Vodka and can't be on any existing drink menus. Submissions will be evaluated by a panel of judges (local hospitality pros and food media), and the finalists will pour their creations at the throwdown party at the Gibson Guitar Showroom on Sept. 24 for a popular vote. The winner gets some cool prizes, plus bragging rights as the creator of Austin's official cocktail for the next 12 months. Send recipes to Beth Krauss of the Austin Convention & Visitors Bureau at bkrauss@austintexas.org by 5pm on Thursday, Sept. 3. 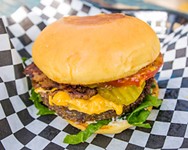