On 2008's tour, we drank too much, missed a couple of buses, were much too loud, and finally stopped when we were cut off. This year was the same concept, but a better-paced, thoroughly enjoyable drinking experience.

It's 11:25pm on a Saturday night, and I'm heading north on Burnet Road. As the vehicle rambles back toward my neighborhood, there's no denying – I'm pretty buzzed.

No surprise there. After all, I've been drinking on and off, with small breaks, for the past 13 hours. I should not be behind the wheel of a car. And thankfully, I'm not – there's a nice employee of Capital Metro doing the driving for me. I'm riding on the Burnet/Manchaca bus line. I'm at the end of the second annual No. 3 Bus Pub Crawl – the most fun you'll ever have on public transportation.

Last year, my big four-oh approached. I floated ideas for how to celebrate – even an alcohol-free swimming party. My buddy Bobnoxious knew that was far too tame. Like me, he's an ardent lover of fine craft beer and couldn't believe I'd actually have a party not involving suds.

So I shared another idea about which I'd halfheartedly fantasized: In my efforts to be an upstanding albeit slightly tipsy citizen, I'd always used Capital Metro to keep the dreaded letters D, W, and I off my driving record. And over the years, I noticed a pattern developing: I was always on the same bus, route No. 3. Almost all my favorite watering holes were strung out along that particular line. The thought occurred: Why not make a party out of it? "Lee, you dumbass!" Bob scolded. "That is exactly what you should do for your 40th!"

As is usually the case in matters of consuming beer, Bob was right. So in August 2008, my friends and I set off down Burnet Road – definitely without Cap Metro's authorization – to execute this really bad idea.

It was spectacularly brilliant and comically stupid. We drank too much, missed a couple of buses, were much too loud, and finally stopped when the highly responsible Ginger Man staff told us we were cut off – a decision for which I am still grateful.

It was a fun time, but not necessarily the tale I want to detail here. I'm older and wiser now and would not want to encourage such behavior among impressionable Chronicle readers. (Okay, you can read about it on my blog: www.i-love-beer.blogspot.com.)

Instead, I'll tell you about this year's party: same concept, but a better-paced, thoroughly enjoyable drinking experience. Trust me, you and Capital Metro will thank me if you follow the 2009 model instead.

10am: North by Northwest Restaurant & Brewery 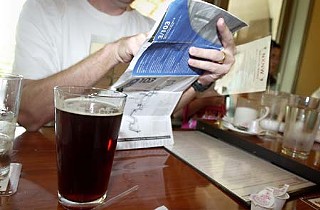 The route begins right here, so we kick off bright and early at NXNW's Brewers Brunch, where brewer Ty Phelps and chef George Powell do fantastic work. Phelps' Okanogan Black Ale, a dark brew with delicious roasted malts, made the perfect breakfast beer. (Stop looking at me like that – you know you've done "breakfast beer" at least once in your life too.) I begin filling my stomach – a major prerequisite for this journey – with Powell's delicious poached eggs, served over shrimp and crab cakes with hollandaise sauce. It's just as great as it sounds. I pass out "Lee for Mayor" buttons purloined from a certain recent political campaign, and about 10 of us head for the bus stop. We purchase 24-hour passes for $1.50 each and hit the road.


On the surface, there's nothing special about this place – just a typical sports bar in a strip mall. But then you see the beer selection. Not many sports bars carry Belhaven Scottish Ale – especially not on the creamy nitro pour they have here – so it wins a spot on the tour. My late-arriving buddy Bill kicks off his day with Guinness Stew and says it's delicious. Our generous bartender Bradley – with a brogue appropriate for a bar named Bagpipes – presents me with a birthday present known as a "Little Guinness." That's what it looks like, but it's actually three-quarters Kahlúa topped with one-quarter Baileys Irish Cream, and it glides over my tongue magically.

We now have a decision to make. A 3pm beer tasting awaits at the Ginger Man. We decide to skip past several obvious stops, get Downtown, and then hit the ones we missed on the way back. With one exception:


Last year, I made the mistake of having a Real Ale Devil's Backbone here – normally a good idea, but (this is important: pay attention!) high-alcohol beers are not recommended for lengthy drinking sessions, and this Belgian-style tripel clocks in at 8.1% alcohol by volume. This year, I grab a different Real Ale product, the pleasantly hoppy Lost Gold IPA, at a slightly more sensible 6.6% alcohol by volume. Blanco's Real Ale has developed into a highly impressive brewery. Most of my party also chose the Lost Gold and agreed that it deserves its name. Being Texan to my core, I often get Frito pie here, but this time the fried okra wins my heart, and my wife declares that the molten-lava-hot fried green tomatoes are "totally worth burning my mouth."

Enjoying an afternoon beer tasting at the Ginger Man. (Photo by John Anderson)

It's long ride Downtown. I'm a little annoyed that I'm almost completely sober by the time we get there, but I'll be grateful for it tomorrow.

Beer expert Debbie Cerda, a No. 3 crawl participant last year and board member of Black Star Co-op Pub & Brewery (www.blackstar.coop), greets us with a selection of crisp summertime beers that wash down great after getting off at the wrong stop and walking two blocks in 100-degree heat. For $25 a head, we each get 11 4-ounce tasters. The Pyramid Apricot Wheat is my favorite, and we debate which pilsner is better: Austin's Live Oak Pilz or Philadelphia's Victory Prima Pils. Cerda holds the tastings monthly; check the G-Man website for details. I also fit in a glorious, cask-conditioned Elissa IPA from Houston's Saint Arnold Brewing Co. (See "Cask-Brewed Ales," for more on cask-conditioned beers.)

It's also my first peek at the new Ginger Man location. I'm sad to see the G-Man leave that cool old building on Fourth, but the new location still has a cozy charm and that same magnificent selection.


Dinner time. This unique combination barbecue joint and brewery has only gotten better since it opened two years ago. We order a half-pound of everything on the menu. There are now about 15 of us, and I'm pretty sure we have a whole pig and cow on our table. It's still hot, so I'm tempted by the Agave Wit, but I'm tired of summer beers. I instead go for another creation by brewer Brian Peters, the Coffee Stout, and am richly rewarded with its bold flavor. I'm in a meat coma.

Heading to the bus stop on South Lamar, we see a rainbow. We're certain this is a sign of good fortune, but at this point the weak start to fall away, leaving the tour. 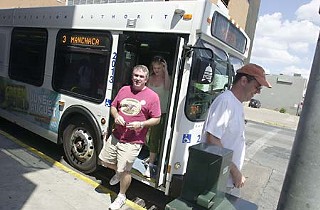 This is one of the places that first made me aware of craft beer. Going strong since 1990, this replica of an English freehouse has lost none of its charm. Texas pints are on sale, so I settle in with a golden Real Ale Firemans 4. And I must have a Scotch egg: a hard-boiled egg encased in sausage, deep-fried, and slathered with orange marmalade. My less-experienced tablemates are horrified, but it's my favorite pub grub ever. Good thing I took my Lipitor.

My wife heads home to relieve the sitter, and we lose a few others. Bobnoxious hitches a car ride with sober friends, and we curse his disloyalty. At 29th and Guadalupe, a couple more vanish into Toy Joy, never to return.


Drungo is this year's new addition to the tour. Lovejoys founder Chip Tait opened this West Campus bar last year, and it's my first visit. Bobnoxious awaits with a pitcher of Sierra Nevada Pale Ale, one of 16 tap beers here. More impressive is the large bottled beer list, about 40 choices ranging from the bland (Bud Light, et al.) to the spectacular (Unibroue Trois Pistoles!). The sober friends say the cheeseburger is great, but I can eat no more. Drungo offers pool and darts, too. Lots of businesses have failed in this location; here's hoping Drungo isn't one of them.


My absolute favorite bar in Austin, and since the sun is long gone, we take a seat outside in the parking lot/biergarten. If you think there's a better neighborhood bar in Austin, well, you're wrong. We're down to four hardy souls now. I love what brewer Josh Wilson has been doing here lately, and I highly recommend Thursday nights, when his house brews are on special. I'm probably easy to please at this point, but his Weizenbock is sublime. This dark-wheat style has this delicious banana taste to it. I could easily drink nothing but this the rest of my life.

Bob's wife, now sobered up from her stint, takes him home, and Todd begins a long bus trip south to Manchaca Road. He wins the endurance prize, at my side since the beginning.


The end of my journey and the only classic dive on the trip. This is the place where Christmas decorations never come down. We left out Ginny's Little Longhorn Saloon and the Poodle Dog Lounge, which caused some angst, as those were the highlights of last year's trip. Lala's was actually closed for vacation last time, so this is my first visit in years, even though it's my neighborhood bar. The place itself hasn't changed, but the clientele definitely has – it's now packed wall to wall with hipsters. Jason and I each enjoy a shot of Jameson and catch up on old times.

And then, I'm done. After an eight-minute walk, I reach my front door at about midnight and congratulate myself on a superbly executed adventure. I already can't wait for next year.

OTHER SUGGESTIONS ALONG THE WAY

Hole in the Wall
2538 Guadalupe

Guidelines for Doing Your Own Bus Pub Crawl

• Pace yourself. Eat throughout the day, and drink plenty of water. I recommend one big glass of water for every beer.

• Avoid high-alcohol beers. If not, you won't last.

• Know when to call it a day. If you've finally crossed the drunk line, declare victory and head home. Don't make the bartender (or worse, law enforcement) do it for you.

• Don't puke. An extension of the previous point. Your bus driver doesn't get paid enough for that kind of grief.

• Plan your endgame. Figure out early which bus will get you home, or take cab fare. Do not drive yourself home under any circumstances!