Food news from in and around Austin, from farming to freebies

Tweet
print
write a letter
Sincere congratulations to Dorsey Barger and Susan Hausmann on joining the ranks of Austin's urban farmers. The couple threw a keg party last week to celebrate closing on the purchase of 2 acres in East Austin where they will live and grow organic produce to supplement the output of the garden at Eastside Cafe (2113 Manor Rd., 476-5858, www.eastsidecafeaustin.com). We wish them great success with the new project!... The block of Nueces between West Sixth and Seventh is about to get a very interesting makeover. Ranch 616 (616 Nueces, 479-7616, www.theranch616.com) proprietor Kevin Williamson has recently purchased both the paint store just south of the Ranch and Star Bar (600 W. Sixth) on the corner. He's joining forces with two prominent local businessmen to develop what promises to be a very attractive addition to a blossoming entertainment area. Williamson's partner in the reimagined Star Bar is successful Warehouse District bar owner Matt Luckie, and they've already got Joel Mozersky working on the new midcentury modern, Palm Desert-style design for the space. The former paint store between the Star and the Ranch is set to become a classic country Western honky-tonk called the Rattle Inn. Williamson's partner there is respected Asleep at the Wheel frontman Ray Benson. The new bar will be Benson's base of operations when he's not on the road, and his lifetime of music memorabilia and great network of music business connections are likely to be in residence. We're also betting longtime Williamson collaborator Bob "Daddy-o" Wade will have a hand in the artistic direction of the compound... Concerned readers have been in touch lately inquiring about the fate of the popular Kitchen Door (221 W. Sixth; 3742 Far West) bakery and cafe. The company website is down, and both locations are closed with phones disconnected. Second-generation owner Christopher Breed could not be reached for comment. After 35 years, it's sad to think about Austin without those giant cinnamon rolls, the delicious chicken salad, or the distinctive hot meat-loaf sandwich. We'll miss them... Central Texas restaurants are generating lots of conversation these days due to some major magazine coverage. First, Texas Monthly included several area eateries in its list of the state's Top 50 burgers, and then Playboy.com recognized Lockhart's venerable Smitty's Market (208 S. Commerce in Lockhart, 512/398-9344, www.smittysmarket.com) as one of the Top 10 barbecue restaurants in the country... Boomerang's Gourmet Meat & Veggie Pies (3110 Guadalupe, 380-0032, www.boomerangspies.com) has recently added a vegan pie to the menu. The vegan-friendly curry veggie pie is available in the restaurant, via the shipping operation, and at local Whole Foods Markets... Both Andiamo Ristorante (2521 Rutland, 719-3377, www.andiamoitaliano.com) and Olivia (2043 S. Lamar, 804-2700, www.olivia-austin.com) celebrate anniversaries with special offerings during the month of August. Andiamo customers can buy raffle tickets for weekly case-of-wine giveaways, while loyal Olivia diners can choose the prix-fixe menu option Sundays through Wed­nes­days all month long. 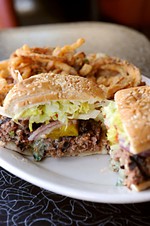 Burger Town
How do our hometown patties match up against the influx of trendy national chains?