Cheese in the Heart of Texas 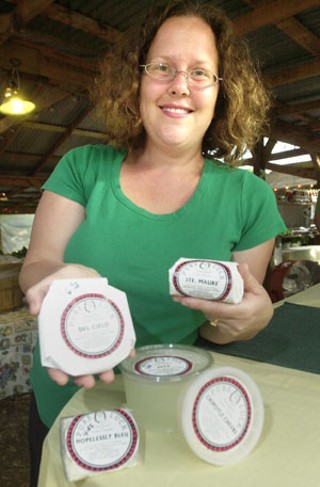 That low rumble you hear just might be the wheels of cheese rolling into Austin for the annual American Cheese Society conference. From the finest cheesemakers on the continent, cheddars, Bries, chèvres, and blues; ricottas, fetas, mozzarellas, and cotijas are converging in Austin for the premier cheese colloquium, competition, and tasting of the year, held next week at the Downtown Hilton Hotel.

ACS was founded in 1983 as a national grassroots organization for home and farm cheesemaking and cheese appreciation; it promotes the farmstead, artisan, and specialty cheeses produced in the Americas. With more than 1,200 members, ACS provides education, business development, and networking for cheesemakers, retailers, and cheese aficionados.

An important part of the conference is the competition, where cheeses are judged by teams of food professionals representing science, industry, and retail. At the first cheese competition in 1985, 30 cheesemakers entered 89 cheeses. This year, 1,326 cheeses (from 32 states, Mexico, and Canada) will compete in 22 categories such as fresh unripened cheeses, blue-mold cheeses, smoked cheeses, and washed-rind cheeses. Winners, including the best of show, will be announced on Friday, Aug. 7.

The fact that the conference is being held in Austin attests to the burgeoning and serious cheesemaking culture in Texas. In 2008, among the winners were Pure Luck Farm and Dairy of Dripping Springs, Haute Goat Creamery of Lubbock, Latte Da Dairy of Flower Mound, Lucky Layla Farms of Garland, and Mozzarella Company of Dallas. This year, 63 Texas cheeses are entered in the competition.

Lynne Devereux, founding president of the California Artisan Cheese Guild, notes that more than a dozen California cheesemakers are headed to Austin, and dozens more are entering the competition. "After eight years attending ACS, I can say that 'big' fits the conference and the location this year. The record number of entries in the competition reflects the tremendous growth in artisan cheesemaking across the U.S. and raises the bar on quality cheesemaking. Because the competition is prestigious, the hard-earned prizes mean that winners can be noticed in the marketplace and in the community of fine cheesemaking."

The conference's keynote speaker is Austin's own Jim Hightower, author, activist, and former Texas Agriculture commissioner. Amelia Sweethardt of Pure Luck Farm and Dairy, Tim Schwartz of Real Ale Brewing Co., and Chip McElroy of Live Oak Brewing Co. are presenting a panel on Texas Terroir, while chefs Josh Watkins of the Carillon and Larry McGuire of Lamberts and Perla will talk about how they source and work with local cheeses. Also participating in the conference are some of the artisan cheese world's most distinguished players. Scholars-in-residence are Hervé Mons, distinguished affineur from Roanne, France, and international specialty-cheese consultant Ivan Larcher of France's Limousin region. Other participants are cheesemonger Ari Weinzweig of Zingerman's Deli in Ann Arbor, Mich.; Laura Werlin, award-winning author of The All American Cheese and Wine Book; and Sue Conley and Peg Smith of Cowgirl Creamery in Point Reyes, Calif.

While most of the conference is limited to ACS members, there are two not-to-be-missed events open to the public. First, on Saturday, Aug. 8, is the Festival of Cheese. Billed as the premier cheese event in the U.S. and "the most outrageous display of cheeses ever experienced," the festival showcases every cheese entered into the competition, available for guests to taste along with crackers, breads, spreads, beer, and wine. It's "the best opportunity of the year for chefs, retailers, journalists, and cheese enthusiasts to experience what America's skilled cheesemakers are up to," says conference co-Chair Cathy Strange of Austin, global cheese buyer for Whole Foods Market. "It's a great venue for trend spotting." Tickets are $75, available at 502/574-9950 or www.cheesesociety.org.

Then on Sunday, Aug. 9, there will be a giant cheese sale open to the public. The competition cheeses will be for sale, offering the public a rare opportunity to buy artisan cheeses from across the country at bargain prices. All proceeds from the sale benefit the ACS scholarship fund. 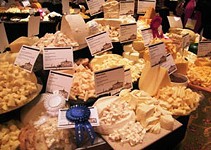 Cheese in the Heart of Texas, American Cheese Society Conference