Tweet
print
write a letter
Wouldn't you know it – we do a big feature on new local burger joints and a brand-new one opens right under our noses just as the article goes to press. Black Sheep Lodge (2108 S. Lamar, 707-2744) has been packed with South Austin diners enjoying burgers and sweet-potato fries – along with complimentary pints of beer or margaritas being served while the management awaits a liquor license. Once the license is in place later this month, Black Sheep will offer full bar service with 18 beers on tap, including some local craft brews, plus 60 or so beers in bottles... Local fans of chef Mark Schmidt's eclectic cuisine at the former Cafe 909 in Marble Falls will be pleased to know that after sojourns in England and Houston, Schmidt is now cooking in Austin. The newly relocated Apple Annies (319 Congress, 472-1884, www.appleanniescatering.com) quietly opened for breakfast and lunch earlier this week and will begin offering Schmidt's farm-to-table dinners and full bar service on June 20. I'm one of those fans eager to give it a try... On the Asian food front, we've heard about Get Sum Dim Sum (4400 N. Lamar #102, 458-9000), a new, quick, casual dim sum spot in the midcity area between Rosedale and Central Market. The new concept is a joint venture from Austin chef Foo Swasdee and San Antonio chef K.C. Chan. Farther north, the third outlet of Madam Mam's (2700 Ander­son #419, 371-9930, www.madammam.com) began serving Thai cuisine over the weekend in Anderson Village just across from the Alamo Drafthouse Village... The folks at Kerbey Lane Cafe (www.kerbeylanecafe.com) were on the "eat local" bandwagon long before it became a national trend. Kerbey Lane has contracted with area farmers to provide fresh, local produce to its four restaurants for many years and now would like for more Austinites to think about growing their own food. To that end, all four Kerbey Lane locations will be selling packets of seeds to prospective gardeners during the month of June and donating the proceeds to the Sustainable Food Center (www.sustainablefoodcenter.org) and its Grow Local program, which provides education and resources to community gardens. In addition, Kerbey Lane will also donate $1 for every package of its pumpkin pancake mix sold in June and accept customer donations to the Sustainable Food Center at each restaurant... Once the NBA Finals broadcasts are over in the coming weeks, I'll be hard-pressed to find something to watch on television, but I am looking forward to the new season of Bravo's Top Chef that starts June 10. The Top Chef Masters cast is made up of 24 accomplished and well-known chefs such as Hubert Keller, Rick Bayless, Elizabeth Falkner, Wylie Dufresne, Cindy Pawlcyn, and Texan Tim Love. It should be very interesting to see how well celebrity chefs handle the pressure of quick-fire and elimination challenges without a brigade of cooks to back them up.
More Food-o-File columns 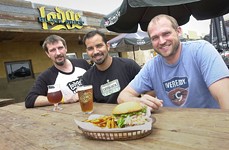 Black Sheep Lodge
Black Sheep Lodge is still pulling in a crowd every night, despite the fact that the liquor license has arrived, so you now have to pay for your drinks 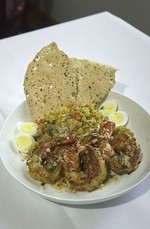