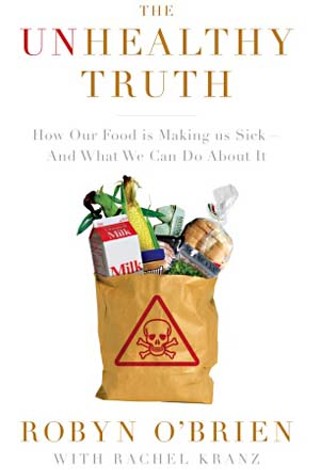 
While it may be no surprise to many Chronicle readers that America's conventional food supply is deeply compromised, there are many Americans who simply do not want to hear it. This book is important in that it is written by a conservative, lifelong Republican whose eyes, much against her will, were opened.

Robyn O'Brien initially believed that Amer­i­can multinational corporations were beneficent and responsible stewards of public health and that anyone who disagreed was at bottom a malcontented, attention-seeking hippie. But when her own children began to exhibit life-threatening food allergies, she wanted to do everything she could to protect them and find out (if possible) what had triggered the allergies. This book chronicles her journey of discovery, as she did her own research into America's staggering explosion of childhood allergies and asthma. O'Brien explains the science of the corruption of our food supply in language any parent can understand and exposes study after study revealing the proven, negative effects of pesticides, hormones, antibiotics, factory farming, food additives, and genetically modified foods. Her outrage that American corporations are perfectly happy to provide safer, more wholesome products to other countries while the United States serves as a dumping ground for food that isn't even legal to sell elsewhere is palpable. Why is it that there are still so many Americans who are resistant to demanding a safer food supply?

Perhaps with such a message coming from one of their own, politically conservative Ameri­cans will be able to hear it not as a plank in the political platform of "the other side" but as the commonsense appeal it is, one that ought to unite us all.