Summer is coming, and it's time for all your favorite tequila cocktails, everything from Palomas to Mexican martinis, margaritas, and submarines. The liquor's price, unfortunately, is a problem for the aficionado. Tequila started its life in the U.S. as cheap hooch with a hippie following (how many hangovers were caused by the mistaken belief that if you drink enough you would hallucinate?). But an attack of fusarium fungus killed more than 30% of the blue agaves in Jalisco, rendering the pricing of the lovable cheap drink into something that resembled that of single-malt scotch.

Well, Jose Cuervo is coming to the rescue. It claims its new Cuervo Silver will stand up to tequilas costing $50 or so a bottle, and at a suggested retail price of $17.99. Cuervo Silver doesn't say 100% Blue Agave on the label, which under Mexican law means that up to 49% of the fermentable liquids could be sugar water, but the proof is in the glass. Cuervo Silver has both the intense agave aroma and the typical black-pepper bite usually only found in much more expensive tequilas. Of course, this is no reason to throw away your Hacienda del Cristero Plata or El Tesoro Platinum, but Cuervo Silver really does a credible job of nipping at the heels of the big boys.

Available all over town, though it's just starting to show up on the racks. 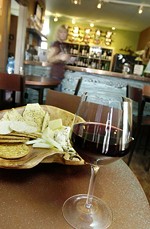