What would the South Austin culinary landscape be without chef Ruben Rodriguez, the man responsible for the famous chip tower surrounded by six tantalizing salsas? It would be too bland to contemplate. That's why, as soon as friends and customers discovered that the chef/owner of Evita's Botanitas has a brain tumor and mounting medical expenses, folks began lining up to help out. Susan Antone generously made her club available for a big party, musicians who frequent the restaurant (Steven Fromholz, the Sunset Valley Boys, Leeann Atherton, Zydeco Blanco, Gurf Morlix, the Texana Dames, Larry Lange & His Lonely Knights, and the Blue Tuesday band with a very special guest) volunteered to play, and auction items began to appear. Ruben himself insists on preparing a mouthwatering appetizer buffet, and Flan Queen Marta Guzman has agreed to come out of retirement and make flan for this one party. Local pie mavens will donate their best pies for the live pie auction, and the silent auction will feature gift items, services, cookbooks, restaurant meal packages, jewelry, and clothing. (Donations for the pie and silent auctions are still being accepted at food@austinchronicle.com.) Tickets for the benefit are $15 in advance and $20 at the door, and cash donations will also be accepted. (Also, send checks to Ruben Rodriguez Medical Fund, 6400 S. First Ste. B, Austin, TX 78745.) Join us for great Austin music, fantastic food, and a South Austintatious opportunity to help a friend in need. 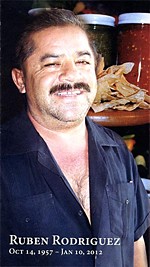 Food-o-File
Peace Through Pie – and beer