Charcuteries table at the dinner. (Photo by Mick Vann)

No one in Austin is more passionate about local, fresh, natural pork than Jesse Griffiths of Dai Due Supper Club (www.daidueaustin.com, 769-7261). With any class or dinner that Dai Due presents, everything is all-natural and grown, harvested, and consumed in season. Vegetables, herbs, and fruits are consumed as soon as possible after harvest, with no middlemen involved. Animals are Old World breeds, all-natural and free-range, hormone- and antibiotic-free, and they are housed and dispatched humanely. Ideally, all products are obtained locally, or as close as possible to the point of consumption. As Griffiths says: "You should know who grew or raised your food and how it was produced. I will never purchase from a grocery; I only buy from local farmers." 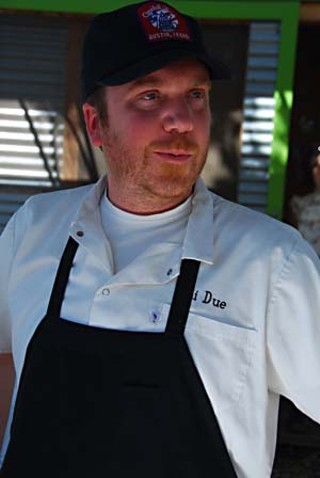 Such was the case with the 120-pound side of pork that Griffiths pulled from the walk-in cooler for Dai Due's hog-butchering class. It was a Berkshire that was pasture-raised by Richardson Farms, and you could almost picture it frolicking around the fields before its ultimate sacrifice. As he laid it on the stainless table, Griffiths eyed the carcass with a paradoxical blend of ravenous reverence and repeatedly commented on how delightfully fatty this particular side of pork was. As the class gathered around, the anatomical lesson and butchering began.

The head was already simmering in a huge pot, waiting to be transformed into headcheese after enough gelatin was extracted. The tenderloin was removed first, to be used whole in a galantine. The front shoulder was separated and cut into chunks for the grinder. Blessed with the ideal ratio of 25%-to-30% fat, it was destined to become sausage. A pot of seasoned neck chunks was started simmering for rillettes. Had we been cutting chops, Griffiths pointed out the space between the third and fourth ribs where they would begin. The gorgeous loin was skillfully removed and brined, and then the ribs extracted (with a lecture on the difference between styles of ribs). As bones were trimmed of meat, they went into the huge simmering stockpot to make a concentrated glacé.

Next, the pork belly was removed, thinly crosscut on top, placed on a bed of aromatic vegetables and wine, and popped into the oven to begin its unique braised-baked transformation. Once the ham was sectioned, with a demonstration of the many different individual muscles, the meat was readied for the grinder. Much of the exterior fat was removed and ground for lard and cracklings. After rapid chilling of the meat and the grinder (to prevent melting of the fat from friction), it was ground for charcuterie.

Over the next four hours, Griffiths demonstrated a cornucopia of charcuterie: First the saucisson sec was stuffed to begin its six-week drying process. Kielbasa was extruded from the bottom of the stuffer into casings, forming large coils. A French boudin blanc was seasoned and stuffed. A spicy Cajun boudin was made from cooked pork, liver, and brown rice. The rest of the liver was used for a pâté to be baked off next to the tenderloin-stuffed galantine. Meat for the rillettes was whipped with fatty stock and molded. A chile-spiked chorizo was made, and finally, we picked over the meat from the head to form two loaves of headcheese.

The class picks meat for headcheese. (Photo by Mick Vann)

Our almost 5-foot-long pork side had been magically transformed into numerous dishes and dinner components, with shockingly little waste. We all got to participate, learned an immense amount, and Griffiths kept the class engaged and entertained for six hours (although it seemed much shorter).

The next day, a group of some 35 folks convened under beautiful sunny skies around a long flower-accented table at Rain Lily Farm in East Austin (www.rainlilydesign.com). After touring the gorgeous gardens and grounds, sipping on cocktails made from Treaty Oak Platinum Rum, Llano Estacado Chenin Blanc, Valley orange juice, and a syrup made from Griffiths' own lemon blossoms, the pig feast began. The effervescent Tamara Mayfield, Dai Due's better half, excelled at making everyone comfy, while the charcuterie table was presented.

Pork shoulder being ground for sausage (Photo by Mick Vann)

The headcheese melted unctuously in the mouth, the liver pâté was paired perfectly with beet chutney and mayhaw jelly, the saucisson sec went wonderfully with the fennel salad, while Griffiths' amazing Firemans 4 mustard perfectly accented the tenderloin pâté and the rillettes. Next arrived a rich soup of lima and pinto beans, kale, and our chorizo, with every drop being devoured. Cornbread laced with fresh pork cracklings was grouped with spicy Cajun boudin and braised collard greens, devilishly good topped with Griffiths' piquant vinegar-pepper sauce. 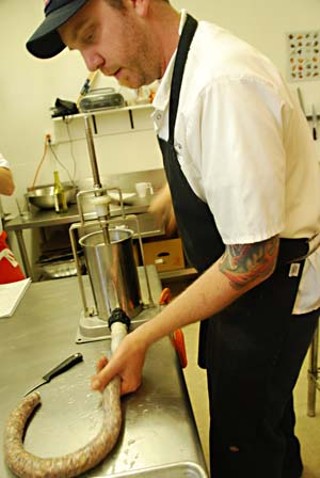 Bowls of braised cabbage topped with sliced boudin blanc and kielbasa sausages arrived to the delight of the crowd; it got very quiet as compliments flowed. Servers next presented amazingly tender, sliced, spit-roasted loin, accompanied by a salad minutes out of the garden, topped with a shallot vinaigrette. The pièce de résistance was the pork belly, golden and crunchy on top, rich and yielding below, served with carrots, pickled radishes, and grilled garlic scapes. It was all we could do to choke down the magnificent beignets fried in lard, served with perfectly ripe strawberries.

Dai Due presents local farm-raised foods simply and deliciously, at the peak of perfection. Griffiths is a master in both instruction and cookery, admirably complemented by the social graces of Mayfield. If you have never taken a class or attended one of their dinners, you have only yourself to blame.

Austinite Ryan S. Adams started his quest to stretch his culinary boundaries by cooking every recipe in Fergus Henderson's acclaimed The Whole Beast: Nose to Tail Eating in November 2007 and estimates that it will take him another year and a half to complete every dish. His quest is based on Carol Blymire's superlative blog, French Laundry at Home (www.carolcookskeller.blogspot.com). Read about Adams' dedicated meanderings through pig anatomy, and applaud him for donating the proceeds to the National Parkinson Foundation in Fergus Henderson's name. 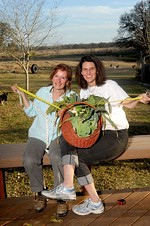 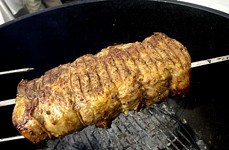