Tweet
print
write a letter
Well, it's official – Downtown Austin has achieved critical mass where both steak houses and Mexican restaurants are concerned. We joined about 400 people sampling roast suckling pig and designer cocktails at the VIP opening of La Condesa (400-A W. Second, 499-0300, www.lacondesaaustin.com) last week. The opening of this hip, Mexico City-inspired neo-Mexicano bistro brings the total of Mexican restaurants in the neighborhood to six, with Garrido's (Third & Nueces) set to debut later in the spring. There was a time when Manuel's (310 Congress, 472-7555, www.manuels.com) and the late, much-lamented Las Manitas were the only Mexican food choices Downtown, but now competition for the enchilada and margarita dollars is fierce. In just the past few years, we've seen the arrival of chain outfits Rio Grande (301 San Jacinto, 476-8300, www.riograndemexican.com), Cantina Laredo (201 W. Third, 542-9670, www.cantinalaredo.com) and Maria Maria (415 Colo­ra­do, 944-2464, www.mariamariarestaurants.com),plus the reimagination of longtime favorite Corazon at Castle Hill (1101 W. Fifth, 476-0728, www.corazonatcastlehill.com). That's a lot of tacos, folks. And to get back to the La Condesa opening for a minute – the Michael Hsu and Joel Mozer­sky-designed space is midcentury modern cool, folks were raving about the custom $10 cocktails designed by master mixologist Junior Merino, and there are certainly some interesting aspects to chef Rene Ortiz's menu, but I have to say, the thing I'm most curious about is this: Has the Austin market evolved to the point that we're ready to embrace a Mexican restaurant charging $4 for chips and hot sauce? Let me know... Several friends have checked out the recently opened Newflow­er Farmers Market (6920 Manchaca Rd., 687-2204, www.sfmarkets.com) in the past couple of weeks. They report opening crowds have been huge, but the advertised "silly prices" aren't really any lower than H-E-B or Central Market... Longtime Austin restaurateur Ronald Cheng has finally found the perfect Downtown spot for his popular Chinese cuisine. Look for the newest Chinatown (109 E. Fifth, 637-8888, www.chinatown-mopac.com) to be open until 2:30am on Fridays and Satur­days and to offer delivery in the Downtown area during lunch and dinner hours... I received an e-mail from Elizabeth Wins­low, formerly of Dishalicious and Greenling, announcing her new online local food delivery service, Farmhouse Delivery (512/529-8569, www.farmhousedelivery.com). Her partner in this venture is Stephanie Scherzer, co-owner of Rain Lily (914 Shady Ln., 636-4430, www.rainlilydesign.com ) in East Austin. They will offer online shopping and home delivery of locally grown organic produce, meats, dairy products, eggs, and artisan food products to folks in the Austin area. They also plan to support local sustainable agriculture with cooking and gardening classes and community events such as farm-to-table dinners at Rain Lily. Sounds great to me! 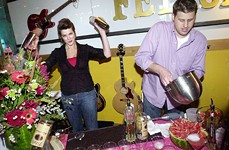 Garrido's
The latest from former Jeffrey's Executive Chef David Garrido is this Mexican restaurant across from Austin Music Hall, and its budget-conscious menu touts tiny but pleasant selections