Tweet
print
write a letter
Several like-minded people e-mailed me the link to the cover story of last week's New York Times food section, where prominent Big Apple restaurateurs Mario Batali, Sirio Mac­cioni, and Jean-Georges Vongerichten were photographed wearing sandwich boards promoting the recession-inspired deals at their famous restaurants. According to Frank Bruni's piece, high-profile NYC restaurants formerly accustomed to monthlong waits for reservations and maître d's who once treated customers as though they were lucky to be dining out at all have developed a whole new attitude in the current financial climate. It's true – restaurants all over the country are hurting during this recession. Bruni's description of prix fixe bargain menus and other incentives felt particularly timely because I'm looking at a mailbox full of press releases and bargain fliers from Austin restaurants all over the economic spectrum. Here are some examples: Both Hoover's Cooking locations (2002 Manor Rd., 479-5006; 13376 Research #400, 335-0300; www.hooverscooking.com) are offering conservative menu portions of some of their more popular items in the classic "Meat 'n' Three" format – a smaller portion of meat with three somewhat smaller veggie sides in the price range of $7.29 to $9.99 – still plenty of food by Hoover's generous standards. In response to customer requests, the newest Z'Tejas Grill (10525 W. Parmer, 388-7772, www.ztejas.com) has a long list of weekday lunch specials under $10 that can be enjoyed in less than an hour. Sagra Enoteca Trat­to­ria (1610 San Anton­io, 535-5988, www.sagrarestaurant.net) has introduced a new recession-friendly weekday lunch menu with a selection of panini, salads, and pastas for less than $10 and has also added free live jazz on Monday evenings, 7pm to closing. Changos Taqueria's (3023 Guadalupe, 480-8226; 3005 S. Lamar, 416-1500; www.changos.com) new value meals offer pork or chicken enchilada, flauta, or taco plates with rice, beans, and a drink for only $6.95. And the south location offers unbeatable deals on rotisserie chicken with rice, beans, tortillas, and a choice of salsa – a quarter for $4.95, a half for $6.95, and a whole chicken for $12.95. And in the fine-dining realm, the elegant Mansion at Judges' Hill (1900 Rio Grande, 495-1897, www.judgeshillrestaurant.com) has revamped its dinner menu to a small-plate format with everything in the $5 to $15 range and some happy hour wine prices every day of the week. Join its "Judges' Jury" online for e-mail announcements about menu specials and other deals. By no means are these the only bargains out there right now – be sure to ask about special deals at your favorite local eatery. Austin independent restaurateurs may not be on the street in sandwich boards, but they are eager to welcome you, and they do value your business... I dropped by two of the fabulous Guess Who's Coming to Dinner parties benefiting Project Transitions last Satur­day. The first one featured a stellar five-course meal prepared and hosted by four gifted members of Austin's Les Dames d'Escoffier chapter: chefs Alma Alcocer-Thomas, Terry Wilson, Kristine Kittrell, and Denise Woods at the historic Josephine House in Clarksville, and the other was hosted by Wes and Emily Marshall and Boggy Creek Farm owners Carol Ann Sayle and Larry Butler in the farmstand, where guests dined al fresco on an all-local meal prepared by chef Jesse Griffiths. And later at the Champagne and dessert reception at Nest, guests were all pleased to see a smiling photo of longtime Project Transitions supporter Roger Mollett (his Paris-themed dinner parties are legendary) in a place of honor. 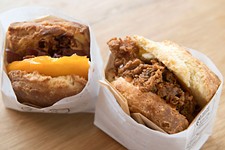 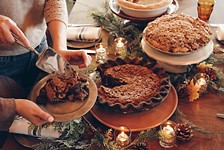