Local pastry chef couples share some of their favorite treats

Tweet
print
write a letter
When local pastry chef couple Philip Speer and Callie Whigham married several months ago, I posed this question: In a situation like this, who makes the wedding cake? It turned out that another pastry chef friend of the couple provided that service, but the question got me thinking about what kind of delectable treats professional cooks might create for one another for some other romantic occasion? In a relationship that includes a shared professional passion for food, what manner of love offering might chefs create for each other for Valentine's Day? With that question in mind, we interviewed three talented young chef couples about their backgrounds, inspirations, and personal tastes. While their jobs will require these chefs to use their considerable skills to delight the public rather than each other on the upcoming romantic weekend, each of these gifted culinary artists still had plenty of inspiration when it came to the idea of pleasing their beloved. 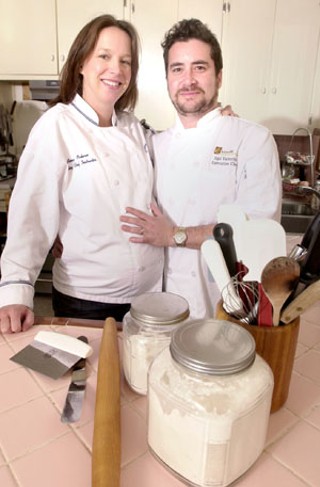 
Puerto Rican-born chef Egil Valentin first met Amy Osborn when she applied for a pastry chef job at the New York City restaurant Terrace in the Sky. "She came in and did a tasting for us, and her crème brûlée was the best I'd ever had. I could tell her style would fit well with what we were trying to do there," he recalls. Amy got the job, and the two were colleagues and friends for a few years before becoming a couple. They moved to Austin in 2003, married in 2005, and will welcome their first child this March. Amy and Egil's shared passion for food is readily apparent. Their eyes light up and they finish each other's sentences when enthusiastically recounting stories of their life together: exploring country restaurants in the Basque region on their Spanish honeymoon; Egil's life-altering experience as one of 20 American chefs invited to a molecular gastronomy seminar in New York in 2007; their personal catering company called Macondo (www.macondofood.com), inspired by a surreal world depicted in the fiction of author Gabriel García Márquez; or descriptions of the cookbooks they gave each other for Christmas this year (Spain: A Culinary Road Trip by Mario Batali, Under Pressure: Cooking Sous Vide by Thomas Keller, and Alinea by Grant Achatz).

Spain and the inspiration of such cutting-edge Spanish chefs as Ferran Adrià, Oriol Balaguer, and Paco Torreblanca are a common thread in the couple's conversation. Egil is one of the very few Austin chefs creating dishes using the scientific culinary wizardry known as molecular gastronomy, and while Amy teaches classic French baking techniques in the Cordon Bleu curriculum at TCA, the eclectic tapas designed under their Macondo banner are avant-garde for the Austin market. When we challenged Amy and Egil to design menus to delight each other, they took into account shared experiences and current inspirations. Amy devised a menu built around some of their sentimental food memories, and Egil chose foods his wife loves, prepared using techniques that excite him.

Appetizer: Frisée salad with duck confit and brioche croutons. ("We had something similar to this on our first date in NYC.")

Entrée: Gnocchi in Gorgonzola cream sauce with shallots, wild mushrooms, and radicchio ("Part of the first meal I prepared for him at home")

Dessert: Hazelnut and dark-chocolate cream tart with espresso gelato ("Egil's favorite of all my desserts") 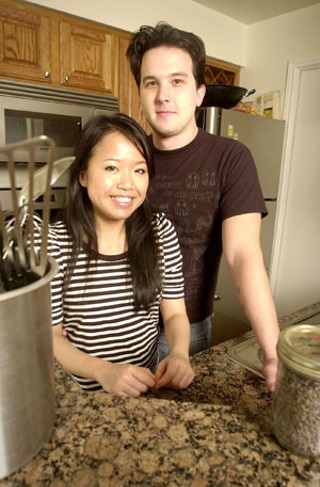 Pasadena culinary school graduates Faith Chan and Josh Matlock had only been dating a few months when she announced she was moving to Singapore to be closer to her family. "I wasn't about to let her get away, so I told her I was coming with her," Josh remembers. The young couple began their life together with an international adventure in the South­east Asian financial metropolis. Their yearlong stay made it possible for Faith to be nearer family in both Singapore and Hong Kong, Josh got the opportunity to immerse himself in Faith's culture, and they began their pastry careers in a cosmopolitan city awash with high-profile restaurants. While Faith toiled in an Italian pastry shop, Josh made desserts in a French fine-dining restaurant. The hours were long, and the market was glutted with cheap skilled labor, so salaries were low. They moved back to the states in 2006 and spent more than a year in Los Angeles before settling in Austin in the fall of 2008. Their arrival in Aus­tin happened to coincide with the renovation and reopening of the historic Paggi House and the reconceptualization of Cissi's Market. They landed jobs that made it possible for the new kids in town to make their mark on the Austin scene almost immediately.

For a young couple who spends their work days making desserts, neither Faith nor Josh admits to having much of a sweet tooth. They both describe being inspired by the savory cooking techniques and visual images created by top Asian and American chefs. Their busy work schedules don't leave much time or energy for cooking at home these days, but Faith says: "If we ever had much time to make special food for each other, it would probably be meat – beef, duck, or pork. We're both big fans of the pig." (She reinforces this statement by rhapsodizing about memories of her first taste of pork sausage at Luling City Market last fall.) In fact, the special romantic menus they imagined for each other are based on Shang­hai-style comfort foods and are strikingly different from the menus either pastry chef will be serving to the public this weekend.

(Inspired by his favorite dishes from Hong Kong) 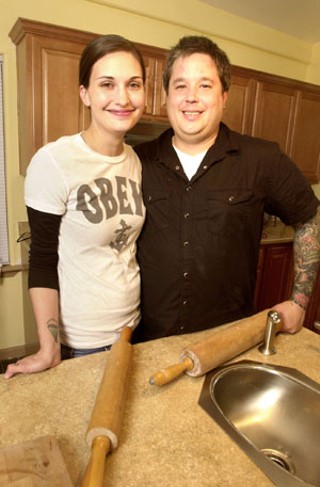 
Working at two of Austin's most successful fine-dining restaurants has provided Callie and Philip Speer with opportunities few other local pastry chefs can claim. Philip spent a week cooking in New York City with Uchi chef/owner Tyson Cole during an Iron Chef challenge on the Food Network, and Callie will work alongside parkside chef/owner Shawn Cirkiel when he makes his third dinner presentation at the James Beard Foundation House later this month. Callie, who grew up in Austin, and Philip, who moved here as a young man, worked their way up the local pastry ladder over a period of years. "I knew from the time I was 11 or 12 years old that I wanted to be a pastry chef just like a family friend who made a big impression on me when I was a kid," Philip recalls. He's been lucky enough to get jobs over the years that offered him the opportunity to develop skills every well-rounded pastry chef needs: daily pastry production and management at Cook's Night Out, Quack's, and Texas French Bread; French desserts at Jean-Luc's French Bistro and Aquarelle; sophisticated amenities and banquet production of plated desserts at the Hotel Icon in Houston; elegant, seasonal plated desserts at Starlite and Uchi. A family friend gave Callie her first restaurant job at Vincent's on the Lake, and she later pursued a path from Cafe Caprice to Jeffrey's and Cip­o­lli­na to Mars before landing at parkside last fall. Chef pal Joe Hanus of the Woodland introduced Callie and Philip a few years back; they married and started their family in 2008.

While Philip has the reputation as one of the only Austin chefs to utilize cutting-edge molecular gastronomy techniques in his dessert presentations (see "Desserts at Uchi" and "Sci-Fi 2008," July 25, 2008), Callie describes herself as someone who likes re-creating old favorites and updating classics. Her bags of doughnut holes with homey apple butter are so popular at parkside they've earned a permanent place on the menu. And though the elaborate desserts Callie and Philip create for work may require hours of preparation time and several components, their taste in home-cooked meals and desserts is very simple. "One of our favorite treats for each other is go out for brunch [at Lamberts or Moonshine] or fix it at home together. At this point in our lives, spending time with the baby [daughter Lucia] is more important than spending time in the kitchen," Callie explains.

Callie and Philip's Brunch for Each Other:

Desserts: Flan (his treat for her) and banana pudding (her treat for him)

Preheat oven to 350 degrees. Grease a 12-cup muffin tin and set aside. Sift first three ingredients together and set aside. In a mixing bowl with a paddle attachment, cream butter and sugars together on medium speed until light and fluffy. Add eggs one at a time, and beat to blend. Add milk, and beat to blend. Gently fold in dry ingredients, and then add ginger and pears. Do not overbeat batter. Scoop batter into muffin tin, and bake for 25-30 minutes or until a toothpick inserted into the middle comes out clean. Cool on a rack. Serve warm or at room temperature. 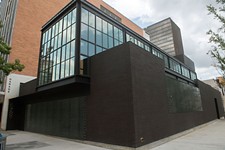 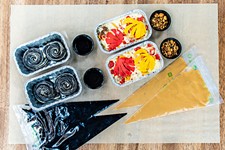 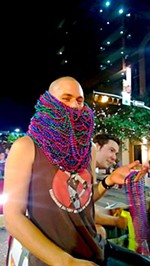 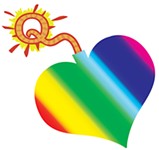 Gay Place
It's Valentine's! Who's your lover? Gay Place, that's who.