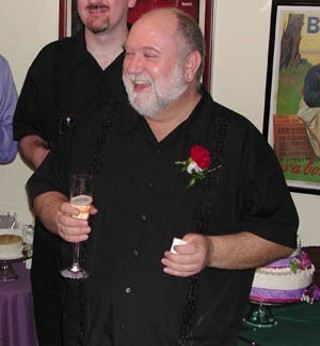 Roger Mollett, 53, died last week in a Minnesota hospital from complications of diabetes and liver disease. For many Austinites, the genial chef was the individual they most identified with the flagship Central Market grocery store, because he was the first food information specialist (foodie) hired in 1993, he helped to create the in-store demonstration department, and he taught more than 20,000 students in the very popular Good Cook series of basic-techniques classes in the Cooking School from 1995 until 2003. He also represented the store in regular local TV and radio cooking segments for several years. Mollett's legion of local friends and fans will remember him fondly for his enthusiastic appreciation of fine French food, his good taste and unerring talent for ferreting out thrift-shop treasures, and his complete devotion to his beloved partner, Greg Murphy, and their pets. Mollett was an inspiring teacher, a delightful host, and a cherished friend to many. He is survived by an older brother and sister and their extended families in Texas and Oklahoma, Murphy, and their "girls," Emma and Chloe, of Minneapolis. Mollett always said he wished to be cremated and have his ashes sprinkled over the Paris he adored. While we can't say for sure what Murphy will do about that, we do know there will be a celebration of Mollett's life at Boggy Creek Farm some time later in the spring, and we'll provide more information about the event when definite plans are made.