Feb. 16 is the day for changes on the restaurant news beat, Mighty Fine is the place for families during the recession, and more

Tweet
print
write a letter
This past week was a busy one on the restaurant news beat – plenty of gossip via personal conversation, phone, and e-mail. Feb. 16 seems to be the effective date for several changes. That's when Deegan McClung takes over as executive chef at Jeffrey's (1204 West Lynn, 477-5584, www.jeffreysofaustin.com), implementing a new menu that will reflect the Creole-French and Southern influences of his New Orleans heritage combined with some Asian touches. After 16 years at Jeffrey's, three of them as executive chef, Alma Alcocer-Thomas is leaving the landmark West Austin eatery. No word yet on where the gracious and talented chef will be working, but it's hard to imagine a woman of her skills being on the market for long. Talented young chef Sean Fulford, formerly of Vin Bistro, is already in the kitchen at Cissi's Market (1400 S. Congress, 225-0521, www.cissismarket.com), replacing McClung at the wine bar; he brings a volume of food-and-wine-pairing experience... Also in that time frame, Lamberts (401 W. Second, 494-1500, www.lambertsaustin.com) chef/co-owner Larry McGuire and his various business partners will be busy with the opening of two new eateries – La Condesa (400-A W. Second, 499-0300, www.lacondesaaustin.com), a hip Interior Mexican bistro named for the bohemian Mexico City entertainment district, set to open under the direction of chef Rene Ortiz in the AMLI building at West Second and Guada­lupe in mid-February, and Perla's Seafood & Oyster Bar, the casual seafood spot that will take over the former Mars location on South Congress in time for South by Southwest... Fans of longtime Austin chef David Garrido will be pleased to note that he has a new restaurant in the works. Look for Garrido's to open in the ground floor of the 360 Condominiums at West Third and Nueces with interiors designed by Leslie Fossler and Aubrey Carter some time in late spring. Garrido is currently testing recipes for the new menu, which will feature his unique interpretation of Interior Mexican tacos paired with wines, tequilas, and martinis... The $600,000 renovation is complete, and Finn & Porter (500 E. Fourth, 493-4900) in the Austin Hilton Down­town is open with two new private dining rooms and an expanded sushi bar... If there's any question about where Austin families are going for Sunday dinner during this recession, I discovered the answer last weekend. The midday family crowd at Mighty Fine (Braker & MoPac at Arborwalk, www.mightyfineburgers.com) was just enormous, and I noticed a similar family throng eating burgers and enjoying the playscape at Phil's Ice House (5620 Burnet Rd., 524-1212, www.philsicehouse.com). Look for two more of the phenomenally successful Mighty Fine outlets to open this spring, one in Sunset Valley and the other in Round Rock... Girl Scout cookies went on sale last week and will be available through Feb. 27. The annual program teaches entrepreneurship and economic literacy to girls from ages 6 to 18, and $2.65 from every box sold here goes directly to support the programs of the Central Texas Girl Scout Council. Go to www.gsctx.org for a listing of area cookie booth locations, or order from your favorite Austin Girl Scout... Beloved former Central Market Cooking School chef Roger Mollett died Tuesday, Jan. 27, in Minneapolis due to complications from diabetes and liver disease. We will have more information about Mollett's life and plans for a local memorial service in next week's issue. To post condolences to Mollett's partner, Greg Murphy, or his family, go to www.caringbridge.org/visit/rogermollett. Food-o-File
Chow down to benefit veterans? Consider it done. 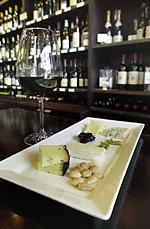