Modern-day San Antonio capitalizes on its significant place in Texas history as well as its Hispanic cultural heritage to make the city a genuine tourist mecca. The campus of the Culinary Institute of America at the restored Pearl Brewery site is the city's newest attraction, representing the confluence of entrepreneurship, historic preservation, and visionary philanthropy that anticipates the burgeoning role of Hispanics in this nation's hospitality industry in coming years. The dream of bringing this new facility to San Antonio was realized by entrepreneur/philanthropist Christopher "Kit" Golds­bury with the contribution of two iconic Texas products – Pace Picante Sauce and Pearl beer.

David Pace founded his eponymous salsa company in San Antonio in 1947 and ultimately dreamed that his tasty product would make him the Heinz of the salsa industry. Kit Goldsbury bought the company from his father-in-law in 1985, greatly expanding the brand through modernizing the manufacturing process and using memorable national television ad campaigns ("New York City? Get a rope!"). Thanks to consistent product quality and creative promotions, Pace dominated the American salsa market when Goldsbury sold the brand to the Campbell's Soup Co. in 1994 for $1.12 billion. A portion of that money is what eventually funded Goldsbury's personal culinary dream for San Antonio – on the spot where another iconic Alamo City product was born.

Goldsbury's investment corporation, Silver Ventures, bought the 22-acre Pearl Brewery site on the east bank of the San Antonio River just north of downtown in 2002 with elaborate plans for developing a mixed-use urban village. The company restored some of the historic late-19th century Victorian buildings as well as some of the mid-20th century industrial outlets and also added new construction to create an area where people can live, shop, eat, play, study, and learn. The 1,100 feet of riverfront at Pearl will eventually double the length of San Antonio's famed Riverwalk – with a barge-turning basin at the northernmost navigable point on the river and a stage and amphitheatre on the banks. The project components that are currently operational are the Pearl Stable meeting and event facility, the Aveda Institute San Antonio, the Texas Farm to Table Cafe, the Synergy Studio, Run Wild Sports, and Melissa Guerra's Tienda de Cocina store, featuring culinary ingredients, kitchenware, and crafts imported from Latin America.

Silver Ventures built a state-of-the-art kitchen and classrooms for Pearl's anchor tenant, a research and educational facility called the Center for Foods of the Americas, which debuted in 2006 with consultation assistance from the Culinary Institute of America. The center's goal was to elevate Latin cuisines "to their rightful place among the great cuisines of the world and to promote Latino diversity in the U.S. foodservice industry." To that end, Golds­bury pledged the largest single donation in the history of American culinary education, $35 million – $7 million for facilities in San Antonio; $8 million to the CIA to fund Latin culinary studies programs and facilities at the main campus in Hyde Park, N.Y.; and $20 million earmarked for scholarships for Latino culinary students to study in San Antonio and New York. "Our vision is for the [Center for Foods of the Americas] to help raise awareness of Latin American cuisines as being among the world's leading culinary traditions, with Latino chefs at the forefront of this movement," Goldsbury explained, adding that "this is a chance to give back to an industry that was the source of my success, by creating educational opportunities that will open doors for others in the food industry."

The Center for Foods of the Americas officially became the second branch campus of the Culinary Institute of America in 2008 with an inaugural class pursuing a 30-week certificate program in culinary arts. As the extensive new facilities are completed, the program will host 120 culinary students per year and also offer continuing education classes on Latin cuisines for culinary professionals (see "CIA San Antonio's Classes for Chefs and Enthusiasts"), as well as recreational classes for the public. The new campus made a splashy debut on the international culinary scene in October 2008, when CIA San Antonio hosted the first Symposium on Latin Cuisines, Cultures, and Exchange titled Latin Flavors, American Kitchens: Envisioning a Future of Excellence, Innovation, and Opportunity. This year's program was designed to educate American restaurant industry and media professionals (myself included) about the distinctive ingredients and techniques necessary to create authentic Latin dishes for American menus, specifically focusing on dishes from Mexico, Brazil, and Peru.

The conference was held in the beautifully restored Pearl Stable with presentations ranging from seminars on the history of New World ingredients to the authentic interpretation of Latin dishes on American menus and the advancement of Latinos in American kitchens and an exploration of successful menu strategies to the fine-dining cultures in Mexico City and Lima, Peru. Cooking demonstrations were provided by expert international chefs such as Iliana de la Vega, Roberto Sant­ibañez, Carmen Ramírez Degollado, Maricel Presilla, Humberto Sato, Flavio Solorzano, and Pedro Miguel Schiaffino and complemented by walk-around tastings at the campus' outdoor live-fire kitchen. We feasted on contrasting moles from Mexico, ceviches and black-eyed pea fritters from Brazil, and Nikkei and chifa (Japanese- and Chinese-influenced Peruvian dishes) specialties from Lima's dining hot spots. Based on the informative presentations and sensational food provided at the inaugural event, the annual Latin cuisines conferences and continuing education courses at CIA San Antonio are destined to become as important a culinary destination as the annual World of Flavors conferences held at CIA Greystone in California – and they're right in our own back yard! 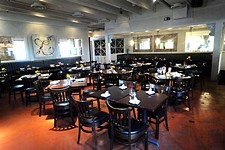 Trento
In West Lake Hills, Italian fare that'll have you licking your plate

My Sweet Mexico: Recipes for Authentic Pastries, Breads, Candies, Beverages, and Frozen Treats
This cookbook isn't for beginners, but the recipes are meticulously documented, gorgeously photographed, and delicious if you take your time with them