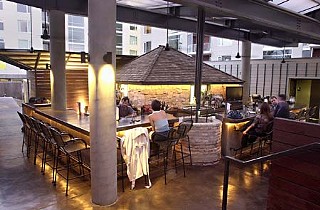 
If you've lived in Austin for any length of time, odds are that traveling around the city can sometimes be disconcerting. Especially lately, and particularly Downtown, where high-rises spring up like mushrooms and the construction crane is once again the totemic Downtown bird. "Where did that building come from?" we ask ourselves. "What used to be on that corner?"

When we peer amidst the modernity for vestiges of old Austin, all too frequently there's not much to see. Some bright spots exist, however, where the new and the old Austin converge and cohabit comfortably – one of them is the latest, stunning incarnation of Paggi House on a bluff south of the river, overlooking the ever-changing Downtown skyline.

One of the earliest extant buildings in the city, Paggi House has weathered much history since it was built in the 1840s as a family home. It became an inn, where Robert E. Lee purportedly stayed (it's definitely possible; he was stationed in Texas before the Civil War). The name honors Michael Paggi, an Italian who traveled to Mexico in the 1860s as part of Emperor Maximilian's entourage. When that ill-fated venture collapsed, Paggi migrated to Austin to become a prosperous entrepreneur with a carriage business, an ice company, an ice-cream shop, a Barton Springs bathhouse, and a steamboat. He purchased the inn on the bluff in 1884 to house his nine children.

Paggi House has been a restaurant since the 1970s, when it still nestled within bucolic green acreage. Now, as a part of a multimillion-dollar development on Paggi's original tract, it's engulfed by a covey of luxury condos. Within a completely new context, the structure has been rethought and retooled; not only did this venerable old lady receive a flattering makeover showcasing some of her best features, but she now wears cascading skirts of sleek decks and outdoor dining rooms that soften the transition between the 19th century house and its abutting 21st century glass-and-steel neighbors. It's a scenario that could easily have been heartbreaking, but the deliberate juxtaposition of old and new and the intelligent design by J Square Architecture work remarkably well.

Inside the house, the ambience is elegant, inviting, and mercifully subdued, and the old/new motif continues. Dark-stained oak floors and black, uplighted ceilings contrast nicely with pale old plaster walls. The two intimate dining rooms, one on each side of the entry hall, sport ornate original fireplaces, black leather chairs, white table linens, graceful black glass chandeliers, and large contemporary paintings by Austin artists Roi James and Shawn R. Camp. The space once occupied by a tiny kitchen has been incorporated into one of the dining rooms, doubling its size.

The new kitchen, housed in a revamped outbuilding, is putting out some interesting food that might surprise Gen. Lee. Executive Chef Shane Stark, Culinary Institute of America graduate and formerly of Kenichi, calls it New American cuisine, but Asian and French influences are evident, too. The starters (also available on the bar and happy-hour menus) are substantial enough to make a meal. The tender butter-poached Maine lobster tail on a bed of mashed potatoes ($16) is pleasantly complemented by astringent grapefruit. Grilled Hill Country quail from Ban­dera ($13) comes over tasty leek-and-mushroom risotto with some snappy green snow peas for contrast. I'm a sweetbreads fanatic, and Stark's take ($11) is one of the best ever – softly roasted with cremini mushrooms, it melts into a creamy sherry vinegar sauce. The mushroom cream soup ($11) is ridiculously rich, redolent of mushroom essence, and spiked with melting chunks of sharp Parmesan.

In the main course offerings, Asian tones dominate in the huge piece of sake-roasted Mero (Chilean) bass ($32), served with steamed Chinese broccoli in a sweetish miso broth, as well as in the seared slices of duck breast ($31), with braised chard, mustard cream sauce, and a somewhat superfluous fried spring roll. On the local/regional front, the four-rib rack of Texas lamb ($37) is grilled with a peppery pine-nut crust and served on a bed of goat cheese mashed potatoes with tiny caramelized parsnips. It's challenging to make filet mignon ($35) interesting, but a smart topping of Manchego, red onions, and mixed mushrooms does the job. While entrée prices are not inexpensive, portions are substantial and satisfying, and you certainly won't leave hungry. There's very little on the menu suitable for vegetarians (salads, cheese plate), but I imagine the kitchen can easily improvise.

Desserts ($9) are probably the least thrilling aspect of the menu, and it's more a matter of texture and mouthfeel than flavor. Apple clafoutis in lemongrass crème anglaise with a quenelle of kabocha squash ice cream is quite yummy, but the components are uniformly soft and rich, save only for a sprinkling of crunchy toffee chips. Same for the pumpkin bread, served with d'Affinois (creamy mild cheese) ice cream and tart pomegranate sauce. Vanilla-bean French toast seems more like a comforting pudding; the compote of grapes provides some textural contrast, but the side scoop of peanut-butter mousse definitely does not. The exception is the oddly named German chocolate tart: The crisply crusted, artisanal Swiss bittersweet-chocolate and coconut tart is aptly complemented by mildly smoked caramel ice cream.

Servers at Paggi House are nattily turned out in shades of charcoal, and for the most part, the service I've experienced has been smooth and accomplished. On my first visit, the entire waitstaff seemed distracted; while nothing was seriously amiss, the effortless-seeming rhythm necessary in the best fine-dining venues just wasn't quite happening that night. Fortunately, subsequent visits completely reversed that impression, with service right on the mark. (My one quibble, and this is common in Austin, is the swift collection of a diner's plate the second he or she lays down her fork, even if others at the table are still eating.)

Co-managers Tori and Tom Tinnon (formerly of Cork & Co. wine bar) are frequently present, unobtrusively orchestrating operations and chatting with customers. Their expertise is evident in the well-balanced and interesting wine list: about 20 wines by the glass, a respectable selection of bottles under $40, and a variety of offerings from France, Italy, California, Oregon, New Zealand, and Austria. None from Texas appellations, however.

While the dining room ambience is quietly elegant, it's a different scene at the covered but open-air bar in the old courtyard, which is patronized by a hipper, much more casual crowd. This isn't to say that the bar area is not gorgeous – it is, and the metal sculpture fountain splashing into the ancient stone cistern is brilliant –or that the bar service isn't accomplished; it definitely is. It just feels a bit like the grownups are inside having dinner and the young ones are outside hanging in the bar. Based on the relentless club music and the big TV, this is clearly a planned dichotomy. Maybe it's just another reflection of the venerable old house coexisting with the new Austin.

The new improved Paggi House has just about everything going for it – good food and drink, good service, and good design – and those who dreamed up and executed its reincarnation are to be commended. While there are a few details that need tweaking, it's a little piece of historic Austin sure to become a new urban destination.