When Judy Willcott started her Austin bakery in 1980, she took her inspiration from the rustic artisan breads of France. Texas French Bread has been an Austin mainstay ever since, having weathered both expansions and contractions in nearly 30 years of business. These days, a second generation of the Willcott family is running the bakery operation. Murph and Ben Willcott strive to maintain the standards that are the basis of the bakery's success while at the same time putting their own personal stamp on the long-established enterprise. The brothers evaluated their situation a few months back and decided their wisest expansion plan would be to offer dinner a few nights a week. "The way the costs of everything from real estate to gasoline to wheat flour went up in the past year, we realized we needed to come up with an alternative way to increase sales in the facility we already own," Murph explains. Since both brothers have previous experience with cooking and restaurants, dinner service seemed like the natural way for them to contribute their culinary expertise to the existing business.

Dinners at Texas French Bread are inspired in part by the bistro cooking of France – simple, hearty, seasonal food accompanied by good bread – and also by the bounty of local produce, meats, and cheeses the Willcott brothers discovered at the Austin Farmers' Market Downtown where Texas French Bread operates a weekly booth. Ben shops at farmers' markets and farmstands every week. Murph sends potential customers an e-mail newsletter every Wednesday reporting on Ben's market finds and describing how he plans to incorporate them into the weekly changing menu. The Willcotts are currently exploring the option of adding a beer and wine license, but for now, guests are encouraged to bring their own wines for one of the lowest corkage fees ($7) in town. The underground marketing approach and appealing farm-to-table menu offerings appear to be generating results.

My cousin and her husband joined me for dinner at Texas French Bread on a recent Saturday evening with their bottle of Texas wine in hand. At night, the busy bakery takes on a cozy bistro feel with candles on the table and soft lighting. Sound is muted by rustic muslin curtains (Home Depot drop cloths!) on the tall windows. Ours was one of several tables that began the evening with orders of bruschetta ($6) topped alternately with Pure Luck chévre and tangy olive tapenade or roasted fall tomatoes and arugula drizzled with anchovy oil. Both delicious fillings rested on toothsome toasts of the house sturdy artisan bread. Our gracious server informed us that two of the entrée options (Gulf snapper and grass-fed beef tenderloin) had been so popular on the busy Friday night that they were sold out, but there were still five other tempting choices. The coq au vin ($16) was moist, tender, local chicken braised in a rich, earthy sauce paired with simple buttered potatoes. The classic Croque Monsieur ($11) was piled high with shaved ham and accompanied by a crisp savoy cabbage slaw, frites, and a luscious pot of aioli for dipping. The Mezze Plate ($16) with meatballs made from Loncito's lamb offered a selection of roasted and sautéed fall greens and vegetables, a scoop of quinoa tabbouleh, with condiment pots of aioli and spicy harissa. We completed our meal with a generous portion of warm bread pudding ($7) in a luxurious, ginger-scented rum sauce and a silky, subtle bowl of butterscotch budino ($6) napped with sweetened whipped cream. The fine desserts were complemented by the excellent house coffee and cappuccino. We experienced a very pleasant evening with a meal of simple, well-prepared dishes in comfortable surroundings with attentive service from the restaurant's proprietors and their personable staff. What more could three diners ask for a very reasonable $77? 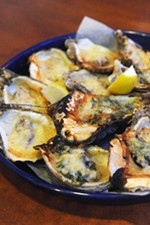