One light version, one dark 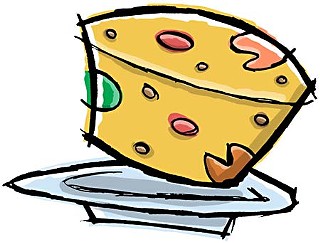 Fruitcake, that darling of regifters, is a dense, heavy ceremonial cake commonly appearing during the holidays. It contains candied and dried fruits, citron, candied fruit rinds, nuts, spices, lots of sugar, and usually a varying degree of alcoholic liquid (rum, brandy, whiskey, liqueur, Sherry, Port, etc.). The ratio of fruits and nuts to batter is high; a proportion of 80% to 20% is not uncommon. Generally, the baker's goal is to add just enough cake to the fruits and nuts to bind the mixture together.

Fruitcakes are blessed (or plagued) by a notoriously long shelf life, especially when they are "pickled" or "aged" and then refrigerated. This process, also known as "feeding the cake," involves wrapping the fruitcake in a piece of cheesecloth that has been soaked in booze of some form or another, sealing it in an airtight container, and popping it into the fridge or freezer. Some simply drizzle the top of the cake with the liquor; the result is the same. Covering the top with powdered sugar is also common, but this dusting has its purpose. The high density of sugar and the alcohol in the liquor both limit the possibility of bacterial growth, prolonging the life of the cake.

The world's oldest known fruitcake made an appearance on The Tonight Show With Jay Leno in 2003. It was baked on Nov. 27, 1878, by Fidelia Ford, to be stored until the following Thanksgiving. She passed away before the holiday, and the family couldn't bear to either eat or dispose of the cake. Her great-grandson Morgan gave Leno a taste of the 125-year-old cake, which the host described as smelling good but tasting "crystallized."

Some fruitcake bakers feel that it is necessary for the cake to "age" before it is eaten, preferring to make the cake several months to a year before it is to be consumed. The belief is that this aging process allows the cake to deepen its flavors while it matures; some even refer to the tannins in the fruits, which develop over time, much like fine wine.

A primitive form of the fruitcake was said to be essential at Egyptian burials, as food for the journey to the afterlife. In ancient Rome, raisins, pine nuts, and pomegranate seeds were added to barley mash, producing a crude fruitcake valuable as a long-lived and compact food that sustained Roman legions during battle campaigns. Panforte, a shallow, chewy, dense Tuscan fruitcake made with a sugar and honey syrup, dates from 13th century Siena.

As fruitcakes marched inexorably through time, they gained ingredients. In the 15th century, dried fruits were imported to other parts of Europe from Portugal and the eastern Mediterranean. But it was the arrival of cheap sugar from the tropical colonies in the 16th century that proved to be the catalyst for the modern fruitcake; the discovery was made that soaking fruits in a concentrated sugar solution preserved their color and flavor. Soon all manner of fruits, including those from the tropics, were being baked into fruitcakes all over Europe.

European nut harvests also figured into the historical record. After the harvest, nuts from that season were baked into fruitcakes that were saved until the harvest of the following year. It was believed that eating the nuts from the previous harvest would ensure and bless that year's successful harvest.

Fruitcakes are part of the culinary repertoire in many modern cultures. I've already mentioned Italy's panforte, but don't forget panettone, the Milanese fruit bread containing candied orange, dry raisins, citron, and lemon zest, or panbriacone, the Tuscan sweet bread studded with sultanas and raisins soaked in sweet dessert wine. Germany has its stollen, a sweet bread packed with candied fruits and marzipan. France has its gâteau des rois, made with brioche and candied fruits, similar to the Portuguese bolo rei and Spain's roscón de reyes. Britain takes the standard fruitcake and coats it with marzipan and icing. All are consumed for the holidays, while the Brits extend the fruitcake season to include pretty much any celebration.

Nowhere in the world do fruitcakes suffer the abuse that they receive here in the States. They are received as gifts from well-meaning friends then thrown away or regifted. Fruit­cakes are used as doorstops, bookends, etc. For the last 13 years, Manitou Springs, Colo., has held its annual Great Fruitcake Toss, "encouraging the use of recycled fruitcakes"; if you don't have one of your own, you can rent one for 25 cents. The current record is held by a group of Boeing engineers who last year built the Omega 380, a bicycle-powered compressed-air cannon that shot a 2-pound loaf of fruitcake 1,420 feet downrange.

Buffalo, N.Y., on the other hand, held a Fruitcake Amnesty Campaign, where unloved fruitcakes could be passed along guilt-free so that they might be given to the homeless. It was only held one year and never repeated. Johnny Carson was famous for his joke: "The worst gift is fruitcake. There is only one fruitcake in the entire world, and people keep sending it to each other." Calvin Trillin is quoted as saying, "There is nothing dangerous about fruitcakes, as long as people send them along without eating them." To America's credit, there is a Society for the Protection and Preservation of Fruitcakes (www.fruitcakesociety.org), but it doesn't have actual meetings and exists only as a website.

The largest fruitcake maker in the world is Collin Street Bakery in Corsicana, Texas (www.collinstreet.com). What began as a small-town hotel restaurant and bakery has turned into a business selling more than 1 million fruitcakes a year. John Ringling, of circus fame, stayed at the hotel every year when the circus performed in Corsicana and insisted that the cakes be sent to family and friends around the world, thus starting the mail-order business. In the mid-1940s, Lee McNutt bought the business upon the death of the owners and began to concentrate on the fruitcakes, which are made using an original recipe from Wiesbad­en, Germany.

These days, Collin Street bakes a full line of bakery products through the year, but between October and December, the staff increases from 60 to 700, producing 30,000 fruitcakes a day. To ensure quality and supply, the company owns a 3,000-acre organic farm in Costa Rica, where its pineapples and papayas are grown. Cherries are imported from Oregon and Washington and raisins from California, and Collin Street has built the world's largest pecan sheller to process its own nuts.

We tasted the bakery's Deluxe, apricot pecan, pineapple pecan, and the apple cinnamon pecan. We especially loved the apricot and pineapple versions and liked the apple, but the deal breaker for us on the Deluxe was the cloyingly sweet cherries.

Jim Murphy of Austin's own Sweetish Hill Bakery (www.sweetishhill.com) is a true devotee of the fruitcake and takes extraordinary steps to bake his version. "I grew up watching my grandmother and mom make fruitcakes. I love the process of making them: the candying process with the different fruits, all of the different steps involved. Sweetish Hill has always made fruitcake for the holidays, and over the years, we've really tried to improve it every season.

"We candy our own fruits during July, August, and September, when the bakery is normally a little slower. The fruits are all-natural, and we use the peels of Ruby Red grapefruit and oranges from the Valley, Michigan Royal red cherries, Texas pecans, with pineapple, currants, and raisins. Once those fruits are candied, they get soaked in Myers's Dark Rum for 24 hours and then get drained, and later the cake gets glazed with brandy-sugar syrup. I guess you'd call our cake a dark style, but it's really moist and more cakey than most others so that the overall effect is lighter and less dense. Ours are best eaten fresh, rather than letting them sit around and age."

Before you decide you hate fruitcake, you must try Murphy's incredible version. Taste a high-quality fruitcake made from great ingredients, and you'll no longer be a hater; these are not the dense sugar bombs covered in fluorescent fruitlike blobs that you see in the chain groceries.

• Mandola's Italian Market at the Triangle (www.mandolasmarket.com) will be selling both imported and house-baked versions of panforte, Tre Marie and Bauli label panettone, as well as baking its own a little closer to Christmas, and is importing panbriacone from Tuscany.

This is a light style of fruitcake, originally based on Good Housekeeping 100 Best Dessert Recipes (2004) but found on the Web in many forms. Lightly toasting the pecans in a dry skillet until fragrant adds to the flavor of the cake; be careful not to scorch the nuts.

Place a pan with water on the bottom shelf. Bake until toothpick inserted in center comes out clean, 70-80 minutes.

Cool in pan on wire rack 10 minutes. Run thin knife around cake to loosen from side and center tube of pan; lift tube to separate from bottom of pan. Invert cake onto wire rack and remove center tube. Turn cake, right side up, onto rack to cool completely.

In 1-quart saucepan, heat apricot preserves, kirsch, and sugar over medium-high heat, stirring constantly, until melted and bubbling. Strain through sieve set over small bowl. With pastry brush, brush cooled cake with preserve mixture. Or wrap cake and refrigerate up to one week, then brush with preserves before serving.

This is a very popular dark fruitcake version, from the folks at Wesson Oil.

Sift 2 cups of the flour with baking powder, salt, and spices. Stir into the oil mixture alternately with the fruit juice.

Mix the other cup of flour with the fruits and nuts. Pour batter over fruit, mixing thoroughly.

Turn into two 8½-by-4½-by-2½-inch loaf pans which have been greased and lined with baking parchment paper.