Skip the sugar crash and dairy congestion, and head for the frozen treats aisle for Coconut Bliss 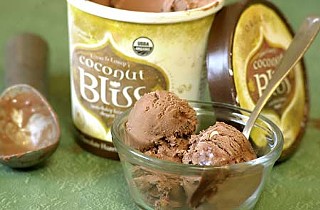 When Luna Marcus and Larry Kaplowitz started experimenting with ice-cream making, it was purely in self-interest: They had both given up dairy for health and ethical reasons but still wanted ice cream of some kind in their lives. They found the available soy and rice products unsatisfactory; some fell short in the taste department, and some just left them feeling bad from the inevitable sugar crash. With an ice-cream maker they got from Goodwill, they began experimenting using coconut milk as a base and agave syrup as a sweetener.

The results were delicious from the very first batch. Coconut milk is very rich, with a naturally creamlike texture. Unlike dairy cream, however, it is considered by many to be one of the healthiest dietary fats (possibly contributing to weight loss rather than gain) and extraordinarily easy to digest. Agave syrup has an extremely low glycemic index, causing such a gentle rise in blood sugar that it is tolerated well by those with sugar sensitivity, including most type 2 diabetics. Not wanting to use anything but the best, Marcus and Kaplowitz devised flavors using only Fair Trade and organic ingredients, and the result is a frozen dessert so delicious that many tasters, including myself, end up preferring it to ice cream.

The texture and flavor of Coconut Bliss is largely indistinguishable from premium ice cream. It's smooth and satisfying, meltingly creamy. The chocolate hazelnut fudge is dense with Fair Trade cocoa and organic chocolate fudge; the cherry amaretto highlights the classic combination of cherries and almond extract. The cappuccino combines Fair Trade coffee with organic vanilla, the Mint Galactica delivers minty chocolate chip, and the Naked Coconut, of course, tastes overwhelmingly of coconut, but the other flavors have little to no coconut flavor. What makes me prefer Coconut Bliss to premium ice cream is how good it makes you feel: There is no sugar crash, no dairy-related congestion, none of the "feeling yucky" that so often comes after a sweet indulgence. In addition to having a low glycemic index and being dairy-free, Coconut Bliss is also gluten-free, vegan, and kosher. (Available at Central Market and Whole Foods, $5.29.) 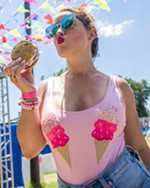 Snapshot: Austin Ice Cream Festival
Where nostalgia for childhood runs as high as the temperature 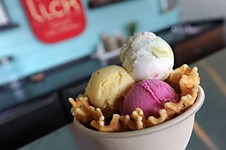 Lick
Their milkshake brings all the foodies to the yard, and they're like, 'It's better than yours'