What's Cooking at the Triangle 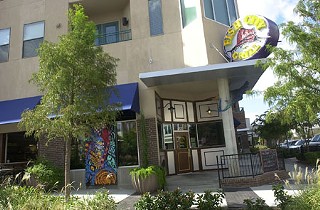 
This is the fourth Fish City Grill in the greater Austin area. The Triangle, a prefab urban neighborhood, is exactly the kind of unique, upscale shopping center that Fish City Grill likes to occupy. The decor and atmosphere are pleasant enough (excepting the leering, one-eyed harlequin mascot), resembling the Black Diamond Oyster Bar in Corpus Christi: dark wood, brick walls, framed black-and-white photos of turn-of-the-century fishermen. A modern wood-and-concrete bar dominates one side of the room, and the bottles of liquor are very attractively displayed.

The service is actually exquisite; the training the staff undergoes is clearly effective and profound. Not only was my server attentive and knowledgeable, but everyone on the floor was aware of every patron, and all service staff worked together seamlessly.

The food is merely okay. The technicians in the kitchen are working a set menu, and although there is a blackboard specials menu, it exists to give the appearance of exciting change, not as evidence of it. A sign declares Fish City to be "The Home of the Oyster Nacho," and the oyster nachos ($6.99) really are something to be proud of. The oysters were hot, sweet, and fresh. Deep-fried for an appropriate amount of time, they were crisp yet retained a soft, cool interior. Served on tortilla chips with a chipotle tartar sauce then piled with pico de gallo, they were the best part of my experience. The pecan-crusted rainbow trout ($13.99) was less impressive. Flabby, oily, and bland, it was accompanied by an uninspired, steam-table squash medley and "rice pilaf" (broth-cooked rice with yesterday's squash medley, chopped very fine, mixed in). The blandness of the trout caused me to speculate upon the probability of it being farm-raised, and upon inquiry, it was. As are the salmon, catfish, shrimp, and tilapia; only the deep-sea fish (such as swordfish) and the oysters are not. There is nothing unusual about this; most restaurants serve farm-raised seafood, as it's less expensive, but it's also less flavorful, and generally it has a poorer texture than wild-caught. I was keen on trying the key-lime pie ($4.49). It is a natural with seafood, and I love lime pie; again, disappointment. Clearly made elsewhere, frozen, thawed, and sliced, it had a faint chemical flavor, a soggy bottom crust, and was overly sweet with only a hint of lime.

Because the oysters were so good, I think that if you stick to the deep-fried items or the wild-caught fish, you can have a decent experience. Ultimately, Fish City Grill reminds me of nothing so much as an updated, upscale, cozier Red Lobster.