Tweet
print
write a letter
Bánh mì, those incredibly affordable and delicious Vietnamese sandwiches, are the perfect meal for on-the-go eaters, a satisfying meal for the cost of your tip at a typical Western restaurant. This is no ordinary cold-cut sub. A thin but crackling-crust baguette slathered with some homemade "mayonnaise" is stuffed with a varying assortment of savory meats, sweet pickled carrots and daikon, julienned cucumber, onion, cilantro, and jalapeño slices firmly wrapped in thin butcher paper and secured with a rubber band. They were made famous in Vietnam, but we have the colonial French to thank.

France ruled Indochina for about 100 years and introduced sandwiches to Vietnam. In the old days, the French would go to their delis to dine on wheat baguette sandwiches stuffed with pâté, sausages, butter, cornichons, onion, and radish. As time went on, these "French sandwiches" (bánh mì Tay) became a status symbol for Vietnamese who put on airs and wanted to be considered French, causing popular cheaper copies to spring up around the country.

Since wheat had to be imported, the bread was baked with half rice flour, producing bread with a thin, crispy crust and light body. French goose- and duck-liver pâté was replaced with pig- or chicken-liver pâté. French sausages were replaced by traditional Viet charcuterie. Butter was replaced with a mayonnaiselike spread made from egg yolks and oil (which the Viets called "butter"). Corni­chons gave way to pickled vegetables, and jalapeño and cilantro were added for flavor. What started as emulation produced a hybrid copy far superior to the original.

In 1954, when the French pulled out, both sandwiches were being served, but by the 1960s, only the hybrid bánh mì remained. Toward the end of the Vietnam War, as anti-communist Viet-namese immigrated around the world, their bánh mì sandwich went with them, arriving to the U.S. in the early 1970s. Small Vietnam-ese cafes and restaurants first advertised them as "French sandwiches" thinking that Americans would relate to that name better than the native term. There was, of course, a learning curve on both sides.

There is some theory and terminology to learn before making the bánh mì plunge. You want bread that is very fresh, with a thin, crackling crust and a moist, light interior. The vegetables shouldn't be cut too small or be too wet, or they will make the bread soggy. The mayonnaise should be robust and homemade but applied sparingly. Meats are generally grilled/barbecued pork, grilled beef (less common), roasted chicken, shrimp or squid, sardines (smashed), meat balls (smashed), pork loaf (a mortadellalike boiled pork sausage), headcheese (gelatinous anise-scented pork in aspic), smooth spreadable chicken- or pork-liver pâté, or the "combination" (pâté, pork loaf, headcheese, and/or grilled pork).

Now that bánh mì are becoming commonplace, we in Austin are blessed with several Vietnamese restaurants which either serve bánh mì as a specialty or as part of a larger menu (especially common in those serving pho and bun). Kate Thornberry and I examine some of Austin's best below. 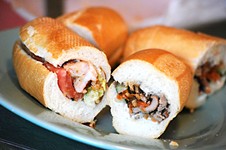