Some local dining landmarks we missed, along with news on Hill-Berts and the Cocktail World Cup

Tweet
print
write a letter
Our recent feature on local dining landmarks generated some responses that made me realize I had not clearly delineated all of our parameters. For the landmark list itself, we included Austin restaurants or artisan food companies that had been in business for 50 years or more as of the date of the article, Sept. 12. As a result of our research, we also ended up with a long list of eateries and a few artisan-food companies that had been in business for 25 to 49 years, and we used a few more criteria to limit inclusion in that list: no regional or national fast-food chains, only chains founded in Austin (so yes to Schlotzsky's, Thun­derCloud Subs, the County Line Bar-B-Q, Dela­ware Sub Shop, and Texadelphia, but no to Golden Chick, Bill Miller Bar-B-Q, and Burger House); no restaurants that were closed as of the date of the issue, which excluded the revered Las Manitas; and no restaurants/bakeries/artisan-food companies from surrounding towns such as San Marcos, Round Rock, Pflugerville, etc., with the exception of the Salt Lick and a couple of places in the Lake Travis area, which in our minds is part of Austin – sort of an arbitrary "our game, our rules" explanation, I realize. The best I can tell at this point, here are the places we missed, with our sincere apologies.

If we've still managed to miss something, please let us know... Austin beer lovers will be pleased to note that the owners of the Ginger Man (304 W. Fourth, 473-8801) have found a place to relocate Downtown. They expect to be in residence at 301 Lavaca by January 2009... The Maldonado family of Hill-Berts Burgers (1503 W. 35th, 452-3287; 5340 Cameron Rd., 371-3717) fame closed their original burger outlet on Lamar last Sunday after 36 years in the same location. The family patriarch announced they'll be converting an abandoned fast-food outlet at 7211 Burnet Rd. into the newest Hill-Berts. Meanwhile, you can still get their signature hand-battered onion rings and thick shakes every day at their other two outlets... Homesick El Paso natives e-mailed to say they were disappointed that Chuco's/10th Street Tacos didn't make it here, but we do know that a new taco joint called the Screaming Goat (900 W. 10th, 477-4628) has taken over the little creek-side cottage... Award-winning local mixologist Bill Norris has returned from the international bartending competition he attended in New Zealand in September – drop into FINO (2905 San Gabriel, 474-2905), and ask him to fix you a Wisdom of the Ages – the drink that earned him and his teammates second place in the competition. Check out my Food blog at austinchronicle.com/ontherange for the recipe and photos... October in Austin is everybody's favorite month for outdoor events, and the coming week really illustrates that. If you don't find something fun to do outdoors this weekend, you are just not trying hard enough! 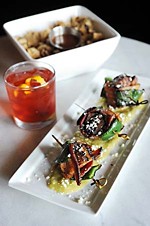