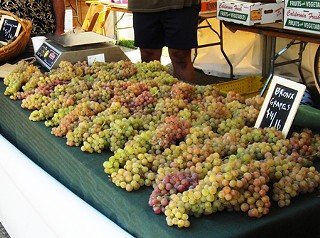 Attended by an estimated 60,000 people, Slow Food Nation was organized by Slow Food USA, affiliated with Slow Food International, an eco-gastronomic, nonprofit group founded in Bra, Italy, in 1989. With 85,000 members in 131 countries, Slow Food's purpose is "to counteract fast food and fast life, the disappearance of local food traditions and people's dwindling interest in the food they eat, where it comes from, how it tastes and how our food choices affect the rest of the world."

And what an event it was. A 10,000-square-foot Victory Garden sprang up in front of the San Francisco City Hall. International food-movement leaders such as writers Wendell Berry and Michael Pollan, Indian physicist Vandana Shiva, and Slow Food founder Carlo Petrini rubbed shoulders with chefs, farmers, artisan-food producers, and the curious public at activities that ranged from free to more than $100.

Situated squarely at the intersection of taste and politics, Slow Food Nation was "the first continental culinary congress," according to ethnobotanist and locavore activist Gary Nabhan, but it was a darn good party, too. Emphasizing fundamental connections between plate and planet, activities ranged from euphoric gastronomic experiences to sober policy discussions, all advocating a food system that is good (delicious), clean (environmentally sound), and fair (socially just).

Although numerous participants and visitors came from around the country and the globe (including a French TV crew), organizers estimate that 80% of participants were from California. There was a small but vibrant Central Texas presence; in the Cheese Pavilion, Paula Lambert of Dallas' Mozzarella Co. served Blanca Bianca to appreciative tasters, and Stuart Veldhuizen of Veldhuizen Family Farm wowed audiences with his Bosque Blue and story of transitioning from third-generation Minnesota dairy farmer to artisan raw-milk-cheese maker in Texas. "It's important for consumers to meet producers," Veldhuizen explained. "I got invited because Bosque Blue qualified at the Slow Food Cheese Presidium, and I wanted to see how my cheese measures up to major West Coast players, like Point Reyes [Northern California] and Rogue Creamery [Oregon]. I come back full of ideas from events like this – it's so worth it."

Attendees Erin Flynn and Skip Connett of Austin's Green Gate Farms navigated San Francisco on bicycles. "I was so surprised and pleased and inspired ... to see all the food luminaries come together, speaking in a unified voice, connecting all the dots," said Flynn. "This is the beginning of a national food movement. People feel they should do something about fixing food issues in this country but don't know what. I think everyone got some ideas about how to go home and work locally."

Grit Ramuschkat, who lives and works at John­son's Backyard Garden farm in Austin, attended Slow Food Nation with her mother-in-law from Albuquerque, N.M. She delighted in the offerings in the Taste Pavilions, which included artisan breads, cheeses, pickles, coffees, chocolates, charcuterie, beers, ice creams, wines, seafood, spirits, and teas. "We have the power to make decisions about what we eat," she says. "I'm not so into politics, but food is my politics. We need to be the little bees that go around pollinating the flowers, spreading the ideas."