It seems that most cities in Texas have their own Mexican restaurant whose history is so embedded in the fabric of the city that it becomes part of the city's tapestry. In San Antonio, it's Mi Tierra. In Fort Worth, it's Joe T. Garcia's. And here in Austin, it's Matt's El Rancho. Since 1952, Matt's has been filling up politicos (such as Lyndon Johnson and Bob Arm­strong, who has a hefty queso-based appetizer named in his honor), sports stars and fans, and Austinites of all walks of life. Its sprawling compound can handle hordes of hungry diners, and it's a good thing too, because, despite its size, it can often be bursting at the seams, especially on football game days. Returning Longhorns consider a stop at Matt's part of their requisite pilgrimage. And why not, with pages and pages of Tex-Mex delights such as burritos, fajitas, and some of the gooiest cheese enchiladas to be had? Throw in an ice-cold beer or frosty 'rita, and you've had one of Austin's signature experiences. 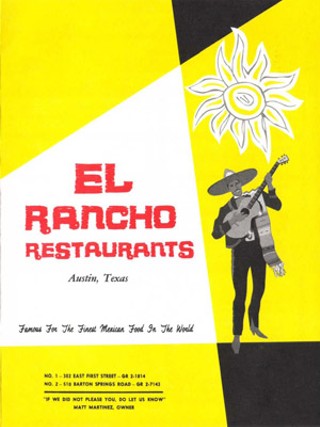