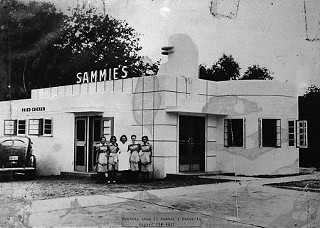 
The building housing Hut's Hamburgers, or at least a section of it anyway, opened its doors as Sammie's Drive-In in 1939, with carhop curbside service. Its namesake was Sammie Joseph, a member of the well-known Joseph clan of Austin (real estate, food service, bars, etc.). Sammie ran it through the years, and as the fascination of dining in the car dwindled, he added a dining room on the east side in 1947 and a main dining room in 1954. Not long after that addition, the business was sold, morphing into Eli's Lounge. Eli's had a successful run of about 10 years until it was sold again, becoming Picante Mexican Restaurant in October 1964. If you look carefully when you come through the door, you can still see a section of the original wallpaper near the doorway.

The Picante lease was purchased by Homer "Hut" Hutson in 1969, who turned it into Hut's Hamburgers. Hut's had originally opened on South Congress in 1939, moving in 1959 to the space where GSD&M now sits and to the current location 10 years later. The business changed several times through the 1970s, and in 1981 it was bought by Mike "Hutch" Hutchinson and Chuck Gist.

After remodeling, the pair had about $100 left in their accounts. Hutch and Chuck are responsible for the menu found at Hut's today, after deciding that 20 hamburger selections sounded like a nice round number. Hut's offered the first made-in-house veggie burger in Austin, and over the years, 14 sandwiches have been added, as well as plate lunch items, sides, and desserts. Live music was dumped for more dining space, and Hut's is even going lean and anti-grease by offering longhorn- and buffalo-meat patties. Gist has retired, but Hutch is still at the helm after 27 years.