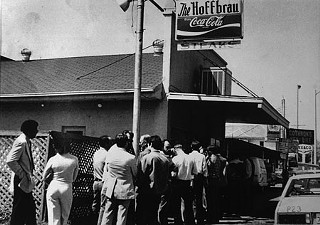 
Robert "Coleman" Hamby was delivering block ice for Mission Ice in 1934 when he decided to make a move. For the princely sum of $250, he purchased a boarded-up feed store from the Fisher Bros. Grocery Store next door and opened the Hoffbrau. Back in those days, the Hoffbrau was basically a bar; folks couldn't afford to eat out, but they could usually scrounge up a nickel for a beer. He offered keg beer on tap (a revolutionary trend back then) and provided free cold cuts and crackers to keep the customers drinking.

During World War II, the soldiers from Bergstrom suggested that Hamby start serving steaks, so he found a stove-top griddle that covered a couple of burners and started cooking steaks two at a time. Steak sales took off, and the Hoffbrau menu developed: hang-off-the-edge-of-the-plate steaks cooked on the flattop grill, chunky steak fries, and übergarlicky salad. Through the years, Hamby's two sons, Robert and Tom, took over the business, bowing out in the early 1990s.

As a child, Mary Gail (Hamby) Ray worked for her granddad, dad, and uncle in the restaurant, washing glasses in the copper sink up front. "We didn't get a real dishwasher until the Seventies," she recalls. "I'd sweep the floor for the spare change that the waitresses would drop." Today, Mary Gail and husband Ruben carry on a tradition that has changed little; they have added air-conditioning, chicken breast, and lately, a 7-ounce strip steak for light-lunch diners.

Go there today, and you'll see do-everything master R.C., who started working there when he was 18, and waitresses and daughters of original waitresses who have been there forever, and just for grins, they do keep those gargantuan 32-ounce porterhouses in the back cooler. You can still order one, but you have to know to ask for it.