Doing justice in writing to someone as universally loved and admired as the late Danny Roy Young is a daunting task, but I'm not about to let his rich, wonderful life go unremarked. The former owner of the Texicalli Grille was often referred to in the press as the "Mayor of South Austin" or the "Lord of the (Wash) Board," but thousands knew him simply as a true and loyal friend. Danny was a beloved husband, father, and grandfather to his family and a stalwart supporter of the youth programs at his church. He was a reliable percussionist who provided the backbeat for many bands and an old-school restaurateur with the innate gift for hospitality. In the early Eighties, Danny was one of the first restaurant owners to purchase desserts from my fledgling business, helping me to get it off the ground. Danny and LuLu (center) with Texicalli crew
Later, he was genuinely happy for me when I got this job writing about food and restaurants and never missed an opportunity to tell me he thought I was doing it well. My Danny Young story is hardly unique. His fellow restaurateur Bud Royer told me last week that oftentimes when a problem would arise at his family's cafe in Round Top, their first question would be, "What would Danny do in this situation?" and the answer would invariably lead to a positive resolution. Grieving band leader Cornell Hurd said: "One of the best things that ever happened in my life was meeting Danny Young and having him play in my band for 15 and a half years. I loved him dearly and will miss him every day." The many people who loved Danny Young comforted each other at Jovita's last Thursday night during the Cornell Hurd Band's regular residency there, at his funeral on Tuesday, and at the reception afterward at Antone's. Just as percussion instruments (and the people who play them) provide the framework and foundation for the rest of the musical score, Danny Young's big, loving heart provided an important part of the rhythm of this city for nearly 30 years. The beat will inevitably go on, but Austin will not be the same without him. 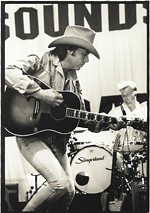