Any Yankee heading south across the Mason-Dixon Line for the first time finds that they have entered a land of fables and horror stories, cautionary tales, rich histories, and perverse fantasies. A place of many fictions, but one that is also completely real.

Three decades ago, my maiden plunge into the Deep South meant first encountering chicken-fried steak, discovering what grits were and what they tasted like, and finding Dr Pepper available at every convenience store, in every restaurant, and in every fast-food joint. Hardee's were only in the South then, Stuckey's only dotting Southern highways, and Col. San­ders' Kentucky Fried Chicken outlets offered packets of honey, which they never did or would in the North. All this may be common now, but then it was of the South.

Tourist attractions are great, as is stunning scenery, but the real heart of regional culture in this country is food. If you want to find out what really makes things tick, go to supermarkets and local diners. Walking the aisles of the former is like browsing a library of people's everyday needs and preferences.

Opinion polls at best give you contrived answers, but salt pork and many varieties of grits nakedly articulate the most honest desires. When I lived in South Carolina, we had a friend who would cook up salt pork when he visited. Believing that they delivered even more salt than shakers, he would generously douse the frying pork from movie-theatre popcorn-salt containers. I never saw this happen in Vermont.

There were many more food revelations to be discovered upon moving to Texas. One quickly learns that real chili does not include beans, peanuts are to be poured into the bottle of Big Red, and barbecue is not shredded pork with a sweet-tart vinegar sauce.

Food is taken very seriously in Texas, because food so often means friends and family. People take pride in their cooking, especially their personally developed sauces. In Texas, months can be spent arguing over which is the best barbecue joint in the Hill Country, while years can be spent perfecting the perfect sauce. Along with barbecue sauces, there is the widest variety of hot sauces. Once considered only a regional speciality, now they are the biggest-selling condiments in this country. Famous chefs, cooks, restaurants, commercial bottlers, and home cooks are dead serious about their hot-sauce recipes.

The only ones who go out in the noonday sun, it's been said, are mad dogs and English­men. Whoever says that, however, clearly has never been to Texas.

The 18th annual Austin Chronicle Hot Sauce Festival is this Sunday, Aug. 24, in Waterloo Park. It's free, but people are asked to bring three nonperishable food items for the Capital Area Food Bank of Texas.

Mostly there will be thousands and thousands of folks and hundreds of hot sauces. A lot of them will be waiting in lines to taste hot sauces, others walking around, and many standing in the shade listening to the five bands that will be playing during the day.

Many will be there because they've entered their hot sauce in the contest; almost all will try to taste as many hot sauces as they can manage. The afternoon will be spent sweating, talking food, tasting sauces, encountering friends, eating, drinking beer, and listening to music.

These folks mostly live in Texas. No one considers enduring the sun and celebrating the sauce as a badge of honor or an unwelcome chore. There is nothing either heroic or annoying about the whole deal. It's just the way life is lived and things are done here. It's no big deal – if the sun gets hot, well then, you just eat something hotter to spite it.

The Hot Sauce Festival certainly is about tomatoes, pepper, and spices. But it's also about more: about experimental hot sauces unique in taste and texture, sometimes using ingredients one would once have never associated with hot sauce.

Over the years the judges have included a significant number of the most innovative, best, and most famous chefs in the state, representing some of the most renowned restaurants. Very much putting their mouths where their money is, they demonstrate a deep, genuine commitment to hot sauce by willingly tasting hundreds of sauces, even those a bit daring in their experimental recipes. Along with them, bakers, food writers, restaurateurs, other writers, and friends – connoisseurs of hot sauce all – help judge.

The Austin Chronicle Hot Sauce Festival celebrates food – especially hot, spicy, mouth-burning, flavorful food. The focus on hundreds of hot sauces, however, inherently makes it about so much more – about history and family; about soil, oil, vast herds of cows, cowboys, and vaqueros; about Texans' zest for eating and Mexico's world-class cuisine!

The sun is usually out baking the afternoon, causing the air to sizzle, but it's like that here in Austin all summer. At least at the Hot Sauce Festival, many of the best sauces are even hotter than the day, which makes the day feel that much cooler. 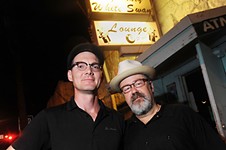