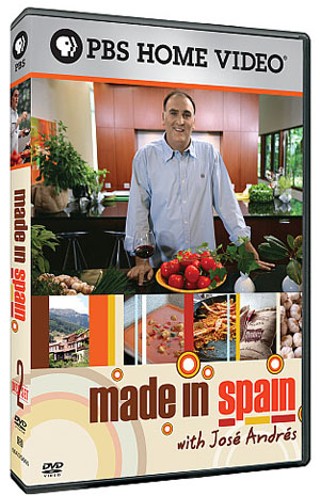 
As someone who has critically viewed culinary TV and video productions for many years, I've become adept at culling the fabulous from the fluff, and José Andrés' made-for-PBS culinary series, Made in Spain, is one of the best culinary series ever made.

Andrés explores all 17 of Spain's vibrant culinary regions with the enthusiasm of a true zealot, taking the viewer to markets, fields and farms, shores, smokehouses, olive presses, cheese caves, wineries, and the rest, ending up in a local restaurant or home kitchen to enjoy the fresh flavors of the fare. This isn't a new gig for Andrés; he has had a very popular and long-running culinary series on Spanish TV known as Vamos a Cocinar.

Each segment of Made in Spain features Andrés in his home kitchen in Washington, D.C., preparing recipes that are all simple, fast, and delicious. While in each region, Andrés introduces us to a home cook or chef who prepares the local fare for him to feast on, and nobody appreciates fine Spanish food like Andrés; his groans and grunts are infectious.

For example, in the Navarra segment, we go into the fields to examine the pepper crop and then follow the fruit to Conservas Perón in the town of Ladosa to watch the piquillo peppers being roasted over beech wood, and then hand-peeled and canned. You can smell the smoky spiciness. He then takes us up in the mists of the Pyrenees to herd Laxta sheep. After milking and a warm-up snack in a rustic, cramped shepherd's cafe, we follow the milk to the small village of Burgui to make queso roncal, going from rennet to the aging caves. The traditional panadería brick oven provides a warm, crusty peasant loaf to eat with the cheese. We end up in Pamplona, dodging the running bulls of San Fermín and dining with a male-only gastronomic society.

Photography is color-saturated and crisp, graphics inform brilliantly, and the hip musical soundtrack is perfection, but it is the exuberance of Andrés and the beauty and complexity of Spain and its food that steals the show. Made in Spain is almost as good as going there ... almost.

The Book of Tapas
The best cookbook gift ideas for 2011