It is a fruit, after all 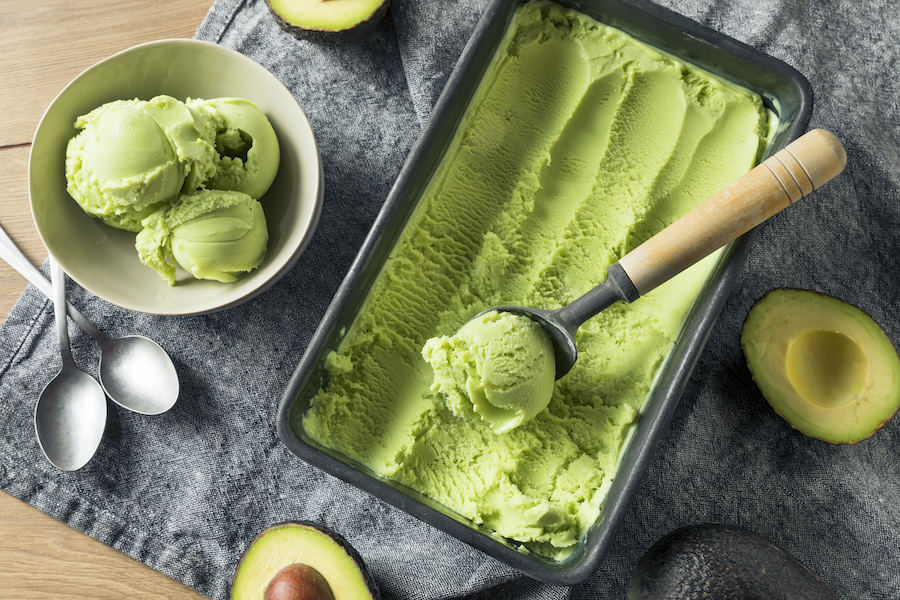 Avocado is a fruit, after all, and people have been eating avocados for dessert for a long time. In America's First Cuisines, food historian Sophie Coe documents that early Spaniards in the New World fell into three camps: those who ate avocado with salt, those who preferred sugar, and those who liked it both ways. After avocados were introduced to the northeastern U.S. as an exotic new taste treat, a 1912 New York Times piece includes a recipe for avocado shortcake. In the 1920s, British author Somerset Maugham claimed to have invented avocado ice cream at his villa on the French Riviera; his version was apparently laced with rum.

Avocado ice cream is a favorite in Mexico, and ice creams and milkshakes are popular in various Asian countries. There are many avocado ice cream recipes out there; a good online collection is at www.gourmetsleuth.com/avocado_icecream.htm. After experimenting with various recipes (chile, tequila, sour cream, etc.), here is my own rich version of avocado gelato.

Note: If you just want to eat avocado gelato without making your own, Whole Foods is the only place in Austin I've found that makes it. They don't always have it, so call first.

With an electric mixer, beat sugar and eggs yolks till frothy.

Pour the mixture into the saucepan and heat it slowly, stirring constantly, until it thickens enough to coat a spoon. Remove from heat and cool.

Peel and seed the avocados. Puree pulp in a food processor with lime juice and salt. Add cooled custard and pulse a few times to mix thoroughly.

Strain mixture through a fine sieve, cover, and chill in fridge for at least four hours. Freeze in ice cream maker according to directions, and store in airtight container.