Grow Avocados in Texas? Yes, We Can. 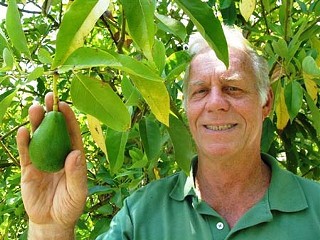 Most people associate avocados with Mexico, California, and Florida, but there's a small thriving avocado business right here in Texas. Along with its famous grapefruits and oranges, the Lower Rio Grande Valley is home not only to myriad backyard avocado trees but to a number of commercial enterprises, as well.

Typically, Valley avocado growers maintain orchards smaller than 10 acres, primarily serving farmstands and specialty mail-order businesses. An exception is Ciomperlik Farms in San Juan, near McAllen. With a 6-acre orchard, Stanley Ciomperlik began a weekend sideline 18 years ago; now he farms 40-plus acres and harvests about half a million pounds of avocados per year. "It's a great business," he says; he's currently developing 150 additional acres. Despite regular pruning, his trees regularly reach 40 feet tall.

Not only does Ciomperlik wholesale fruit to Wal-Mart, HEB, Winn-Dixie, and Luby's, but he also sells Lula avocado seeds to California growers for disease-resistant hosts on which to graft the Hass avocados that dominate the American market. (The smooth-skinned, bright-green Lulas are popular in South Texas, but the darker, rough-skinned Hass variety is better able to withstand shipping around the country.)

Avocados in Texas aren't a new idea – in 1895, John Bourke, a U.S. cavalry officer stationed on the Texas-Mexican border and an avid anthropological observer, wrote: "When the custard-like pulp is beaten up with egg, oil, vinegar, and spices, it makes a most delicious salad and when sliced seems to be equally good. This fruit resembles a pear in shape; is purple in color; the pulp is sweetish and can be eaten raw."

The Texas Avocado Society was formed in Weslaco in 1948 as an association of growers and horticulturists seeking promising varieties from Mexico and Florida to develop a major commercial crop for South Texas. While the Texas industry didn't quite take off as hoped, the soci­ety's research and development legacy remains.

In Devine, half an hour southwest of San Anton­io, retired state employee Bill Schneider turned his avocado hobby into a full-time business. Since 1983, Schneider's mission has been testing, grafting, propagating, and selling avocado trees developed to withstand the cooler temperatures of Central Texas. "I was inspired by people always planting seeds and failing to get healthy, bearing trees," he remembers. "The late Dr. Nor­man Maxwell at A&M gave me some pamphlets, showed me how to graft, and I just kept at it."

Grafting onto hardy Mexican rootstock, Schneider's experiments resulted in three trademarked types (Opal, Wilma, and Pryor) suitable for growing in Central Texas; they usually bear fruit at three years, and their fruits have delicate, edible skins. Each spring, he sells year-old trees for $40 (by appointment: brs@devtex.net or 830/663-2492); he plans to have 1,000 trees available in 2009. Schneider is something of a celebrity in Devine – the Chamber of Commerce's annual fall celebration (www.devinefallfestival.com) is called the Devine Fall Festival and Avocado Showcase.

A San Antonio source for avocado trees is Fanick's Garden Center (www.fanicks.com). Its catalog offers six varieties deemed appropriate for this region, and third-generation nurseryman Mark Fanick says the center has many customers from Austin.

And in Austin, the Great Outdoors Nursery (www.gonursery.com) carries both Lula and Hass avocado trees from Florida for $37.95.

However, not everyone is enthusiastic about avocados in Austin. Julian W. Sauls, professor and extension horticulturist at Texas A&M's Texas AgriLife Extension Service in Weslaco, wrote the definitive 1992 growing guide "Home Fruit Production: Avocado" (aggie-horticulture.tamu.edu/extension/homefruit/avocado/avocado2.html). He says by e-mail, "The best advice for wannabe avocado growers in the central part of the state is to expect to experience serious tree damage and/or death from freezing temperatures sooner or later."