Joe DiMaggio's Italian Chophouse has perfectly made drinks, a solid selection of fish and steak, as well as an ambiance that suggests Joe and Marilyn are nuzzling in the next booth 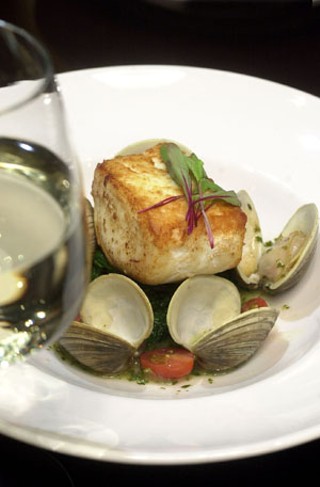 
The Domain opened up with so many high-end restaurants that it's hard to imagine how so many of them are full most of the week. The fight for bragging rights over who has the best restaurant is in the bottom of the ninth, and if you pick your food very carefully, it could be Jasper's or North or McCormick & Schmick's or Fleming's. At Joe DiMaggio's Italian Chophouse, you probably have the best chance of hitting a grand slam.

Enough of the baseball metaphors. Obviously, the place is named after the great Joltin' Joe, the Yankee Clipper, Joe DiMaggio. He was one of the greatest players to ever put on a glove, the man that bridged the Yankees' baseball dynasty between Babe Ruth, Lou Gehrig, and Mickey Mantle. Everyone in the game loved the man for his sophistication, his kindness, and his phenomenal abilities on both offense and defense.

He was also proud of his hometown of San Francisco. That's where he eloped with Marilyn Monroe in 1954. Their marriage was short lived, but DiMaggio never married again. Marilyn died Aug. 5, 1962. Joltin' Joe had roses delivered to her crypt three times a week and would occasionally shed a very tiny tear whenever someone asked him about her, right until he died in 1999. His lawyer said that DiMaggio's last words were, "Now I'll finally get to see Marilyn." That same year, Kinky Friedman wrote his most romantic song, "Marilyn and Joe."

The first DiMaggio's is in his beloved San Francisco, and for now, the Austin location is the only other. DiMaggio himself had no role in the Chophouse. The owners say they were trying to suggest a lifestyle by using his name.

To evoke the luxury of the post-World War II era, the snazziness starts from the moment you enter. Inside, they've given more than half of the space to a gorgeous bar, full of leather and dark wood. Flat-panel TVs over the bar play sports. Live jazz singers (including some of the cream of Austin's jazz scene) croon standards. As in most bars in town, there are plenty of sweet drinks for the patron who's recently sworn off Jägermeister, but we stuck with the classics, including a perfectly made Manhattan ($10) using Old Overholt Straight Rye Whiskey. We also asked for a special recipe margarita ($10) that came exactly as ordered.

The opulent dining room is all tufted leather, dark woods, and pictures of Joe and Marilyn. The surprise was that the place is intimate and cozy, about the size of Mirabelle's main dining room. The servers are smooth and instantaneously available, but could someone somewhere please put a stop to waitstaff saying, "What will we have tonight?" or, "Are we enjoying our food?" I know the concept is to flatter us by using the royal "we," but I keep wanting to ask if they're expecting to sit down and join us for dinner.

We started with the antipasto platter ($16) and the Chilled Frutti de Mare ($16 per person, minimum of two). The antipasto platter is a generous serving – enough for four – of cured meats, olives, and cheese. The quality of the meat and olives was very good, but the little chunks of indeterminate cheese had seen better times. Anyone who likes to see all the other patrons ogle with curiosity will have to order the Frutti di Mare, which arrives in a billow of dry-ice smoke. It's a fancy presentation, and the quality of the seafood is to a very high standard. Four oysters, two U-6 shrimp, marinated mussels, calamari salad, and cured salmon added up to the best dish I had in either visit.

Whoever is handling the fry station has a delicate hand and some very hot oil, because each bite of the Fritto Misto ($11 with fried calamari, shrimp, and vegetables) was crunchy, and there was nary a hint of oil left in the batter. The Polenta con Funghi ($8) features a nicely crunchy outside with a silky interior and includes delicious caramelized baby onions. We were intrigued by a chopped salad ($9) that included Point Reyes blue cheese, peaches, cucumbers, and olives. Unfortunately, the cheese was nonexistent, and the peach was limited to two razor-thin strips sitting atop the salad.

For main courses, the Sicilian Fisherman's Stew ($28) resembles cioppino and uses top-quality ingredients. It's spiced just right with a nice hit of sweet peppers and should please the pescetarians in the crowd.

For the carnivores, there's the chop menu. While they don't have as large an offering as a standard steak palace, you can choose from beef, lamb, or pork. Prices range from a low of $27 for the pork chops to a high of $47 for the porterhouse. At least at DiMaggio's, you don't have to buy your sides. Any chop comes with Parmesan-crusted potato gratin, good-quality fresh vegetables, and a demi-glace.

We tried both the half-rack of domestic lamb chops ($42) and the bone-in rib eye ($42). They cook all the chops in an 1,800-degree oven, so you get a nice sear on the outside. The lamb chops are the ribs, cooked as a whole, then cut into chops for plating. They were fork-tender and thankfully tasted like lamb and not the muttony gaminess that you sometimes get when steak houses try to present a huge hunk of meat.

DiMaggio's is a place where they aren't afraid to leave fat on the bone-in rib eye. Some people like the added richness, while others look at it as debris they had to pay for. Once I cut off the band of fat around the edge, the steak was as good as I've had around town. It was very juicy and had enough age on it to make it tender and flavorful. Even with the discarded fat, it was plenty of food for the biggest appetite.

DiMaggio's wine list has a few hidden gems, like Masi Masianico ($7 per glass), one of Italy's great white wines. My heart started racing a little harder when I found out they had Stags' Leap Petite Syrah ($78), the bottom-of-the-11th grand-slam-home-run of Petite Syrahs. The depth and intense fruit made the chops come to life.

Dessert is usually an afterthought for me, but my wife has a sweet tooth that hits her in restaurants. We ordered the cookies ($7) because they had her favorite – shortbread. They also had thin-sliced biscotti, which was just a tad dry and bland. For me, the winner was the best chocolate cookie I've ever had. It melts in your mouth, leaving mouth-filling richness (lard?) and chunks of chocolate that sit on your palate for just a second, then melt away with everything else. Wow! We ordered a second plate.

The whole experience had a couple of problems, but there's something magical about the place that makes me feel that Marilyn and Joe could be sitting in the next booth, nuzzling, drinking martinis, and being beautiful.